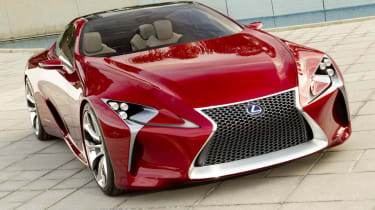 Official pictures of Lexus’s new sports car concept have been revealed. The LF-LC will be unveiled at next week’s 2012 Detroit motor show, and as well as previewing a new styling direction (dubbed L-Finesse) for Toyota’s upmarket brand, it gives us a taster of what a new sub-LFA model could look like. It could even influence a sharply appointed replacement for the firm’s Mercedes SL rival, the notoriously unloved SC430. A coupe/convertible version of the next LS luxury saloon has been rumoured in the past, and this concept’s nametag suggests it could be the first stepping stone towards a production car. If that is the case, here’s hoping the numerous LFA styling cues remain – the LF-LC is a striking looking thing. The ‘hybrid’ badge on the side means a petrol-electric drivetrain will sit beneath the bodywork of this concept at least, perhaps the Lexus LS600h’s 439bhp 5.0-litre V8/electric setup. Come back to evo.co.uk from January 9 for full 2012 Detroit show coverage, when we’ll have more pictures and details of the Lexus LF-LC, as well as a host of other new concepts and performance cars.