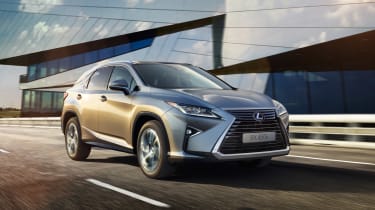 The all-new, fourth generation of Lexus’ RX will be making its European debut at the Frankfurt motor show, following an international launch at the New York show back in April. Available with a 3.5-litre V6 and petrol hybrid powertrains, the new RX will also spawn an F Sport variant.

The first of those engines will be a more powerful, upgraded version of Lexus’ 3.5-litre V6 petrol. The engine has a ‘targeted’ output of 300bhp and comes mated to a new eight-speed automatic transmission. This engine won't hit the UK however, which means the alternative powertrain, a full hybrid 3.5-litre V6 of the RX 450h, is more relevant here.

The revised unit features an improved Atkinson cycle, which combined with the electric motor will also produce around 300bhp. Lexus claims both engines have been tuned for maximum efficiency.

Lexus has also confirmed a new 2.0-litre turbocharged four-cylinder will reach the UK. Found in the smaller Lexus NX and the Lexus IS saloon, the downsized unit is expected to produce 225bhp.

A six-speed automatic transmission will be standard. Lexus says the transmission's ratios have been chosen for strong acceleration from standstill and at overtaking speeds, making it a sporty alternative to the hybrid. 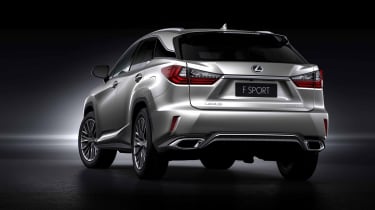 The new car has more striking exterior styling to match Lexus’ latest design language, with a larger front grille and remodeled headlight clusters at the front. Further back, the roof design has been revised, with a more aerodynamic, sloping shape reportedly aiding stability and minimising wind noise at high speed.

Interior changes include a greater emphasis on luxury, with the gearlever being moved from the traditional position beside the driver in order to free up space, whilst a large head-up display takes centre stage in front of the driver.

The RX has been set up to deliver more car-like characteristics, with both the chassis and body structure strengthened to provide greater body control and stability when cornering. 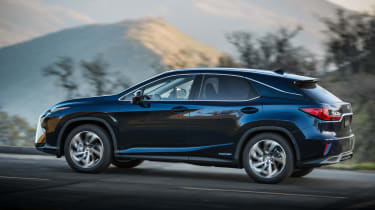 Most interestingly for evo is the promise of an RX F Sport model, intended for more performance-orientated customers. It won’t get a new engine – the two aforementioned powertrains will still feature – but it will sport a number of visual cues and performance enhancing features. These include an ‘active stabiliser’ system, which intends to limit body roll through corners, and the addition of a ‘Sport S+’ mode.

Other key additions for the new car include the introduction Lexus Safety System+, featuring both passive and active safety systems to reduce the chances of an accident, and improve crash rigidity.

Prices for the new RX remain unconfirmed, but the hybrid should start around £45,000, similar to that of the outgoing car. Further details and pricing are due to be confirmed when the car goes on sale in late 2015.

Also appearing at Frankfurt is the revised Lexus GS range. Largely a facelift, the new GS will be supplied with a four-cylinder turbocharged model, just like the IS, NX and RX models. Dubbed GS 200t, it should develop 241bhp and 258lb ft of torque – a little more than that of the other cars.

The 2015 Frankfurt motor show opens to the press on September 15, with and the public two days later. You can find more Frankfurt stories at our show hub.