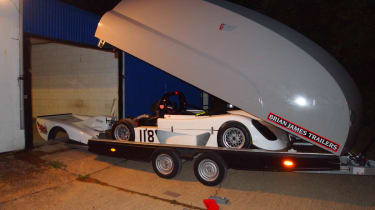 6
Impulse buys are always the best. One day, features writer Roger Green was killing time over lunch looking at Radicals for sale. ‘Would you be interested in going halves?’ he asked. Having recently ‘invested’ in my Clio V6 and a lovely old BMW 1502, I really didn’t think it would be healthy for my bank balance or marriage to indulge in another car. But… but a Radical…The very next day Roger and I looked at a car. A Clubsport 1100. The day after that we bought it.

It’s a beauty too. At just over 11 years old it’s one of the earliest Radicals, but it came complete with a full history file, a recently powdercoated chassis and an engine that needs a refresh but shows around 30 hours of an allocated 50 before a full rebuild is due. We paid £8100 all-in for the car with a spare engine, a bunch of sprockets, a spare exhaust, two sets of slicks and wheels plus a set of wets (with wheels). We’re feeling pretty smug, but then we haven’t even driven it yet…

Rog has some previous with Radicals – three championships contested and over 90 races. ‘The Clubsport is one of the sweetest Radicals,’ says ‘Fireball’ Green, ‘and I really think they are undervalued. In the secondhand market you’ll need at least another £8000 to buy the next Radical up – an SR4 – and while the SR4 is quicker and can carry a passenger, it’s not that much quicker.’

Me? Never even driven one. I’ve tried various Caterhams, single seaters, Ariels and a Palmer Jaguar JP1, but nothing quite so ADHD as a little Radical with a high-revving bike engine.

So, within 48 hours Roger and I had gone from mulling over the idea of owning a Radical to actually buying one and then figuring out how we were going to collect it with a) no trailer and b) no tow car.

The kind chaps at the Radical factory not only loaned us a Brian James Race Shuttle trailer, but they also agreed to check the Clubsport over for us. They’ve given it the thumbs up, and thanks to a last minute loan of an Audi A6 Allroad (excellent tow car, by the way) we smuggled it to my lockup where it awaits its first trackday.