Our Infiniti G37S Coupe has had its first service, and its 316bhp engine is feeling fighting fit 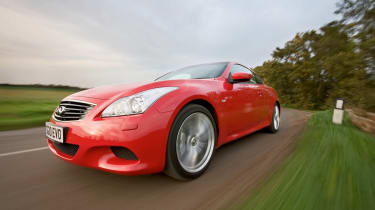 With 9000 miles on the clock it was time for our G37’s first service this month. As there are just four Infiniti dealers up and running in the UK at present (another seven will open during 2011), this could have been inconvenient, yet it was actually anything but.

An appointment was made with the Infiniti Centre Birmingham and a couple of days later GG10 EVO was collected from the evo office, some 70 miles away in Northamptonshire. A courtesy car was left in its place (an EX30d, Infiniti’s likeable mid-size SUV – visit evo.co.uk for a review) until the following day when our Coupe was returned, service done, car valeted. It was as simple as that.

Ostensibly, the collection, delivery and loan car are free, a part of the ‘VIP Service’ that every Infiniti customer benefits from. However, the service did cost a rather startling £360, which seems pricey for an oil and filter change and a few checks, especially when you consider that the 9000-mile service on a Nissan 370Z – which uses the same 3.7-litre engine as the G37 – can be had for around £125.

Service intervals of 9000 miles may seem a little short these days, too, but at least it meant GG10’s engine didn’t have the chance to get all sluggish and reluctant feeling. In fact, now it’s nicely run in, the snarly V6 feels fighting fit and good for every one of its 316bhp. Its overtaking punch never ceases to impress, and the seven-speed automatic gearbox has really grown on me, to the point where I reckon we made the right choice speccing it instead of the manual. OK, so the computer-controlled auto’s changes may not be as smooth as some systems’ (Jaguar’s spring to mind), but it’s good at guessing what gear you want it to be in, while the column-mounted paddles are a pleasure to use – great size, shape and action – when you’re feeling particularly sporty.