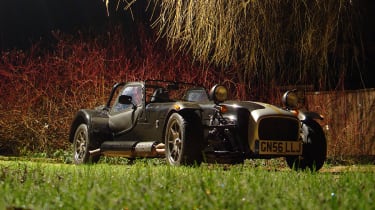 The rest of the evo team thought I was a nugget short of a Happy Meal picking up a Caterham in the second week of December, but when I collected my new long-termer from Caterham’s showroom in Surrey (where, ironically, my old R300 long-termer was waiting to be picked up by its latest new owner), the sun was shining, the roundabouts were greasy and life couldn’t have looked much better. It was the day before my birthday and I couldn’t have asked for a better present.

This is a Roadsport 150, a version that we first tried at the end of the summer. We weren’t overly enamoured by it back then, but Caterham listened, scurried back into the factory and the result is what we have here. The engine has been remapped to get rid of the flat-spots and the throttle travel no longer has the progressiveness of a light switch. Roast leg of driver is now also off the menu thanks to improved cooling. The result is a really, really good Caterham.

You may be thinking that because it’s only one rung up the Seven ladder from the 125 and doesn’t have an ‘R’ in its title, it will be a bit tame, but not a bit of it. The Ford Sigma engine is completely different in this tune. It barks, pops, bangs and doesn’t like being cold, but it also feels like it’s got 150 very healthy horses.

I remember lusting after the original Superlight late last century and this car seems to be the modern incarnation. GN56 has all the lovely Superlight carbonfibre goodies (dash, wings, rear guards), the excellent unpadded but amazingly comfy composite Superlight seats (so I can fit in), a limited-slip diff and the wider track. I also asked for a tonneau so that I don’t have to worry about poppering the roof on at night (yes, I intend to drive it through the frosts, rain and snow with my mop in the slipstream).

Perhaps the only thing that really worried me about this car’s spec was the short-ratio six-speed ’box. It’s geared for just 112mph flat-out in sixth and I had visions of blood trickling out of my ears on the motorway. Fortunately the engine actually sounds great between 4000 and 4500rpm, which is where it sits on the three-lane stuff, and doesn’t have the circular-saw-through-the-skull quality I feared.

Our car also came with the Jubilee pack, which garners the car with very cool stripes and a gold Seven behind the grille. To be honest it’s not terribly good value at £2000, but you pays your money…

The 45-minute drive from the showroom to my parents’ house probably has no more than three or four miles of national speed limit in its entire length and is usually a bit frustrating, but any and every journey in a Seven, no matter how slow, feels like a wonderful adventure. You really see, smell and sometimes even taste the environment you’re travelling through.

Caterhams can be characterful too – the speedo on this one dies above 60mph (hence the estimated mileage and mpg figures this month) – and it’s going to be character-building finding frost on the inside of the windscreen in the morning. But at least life won’t be dull, and that’s a very good thing indeed.