Final iteration of the Lotus 3-Eleven series is one of the fastest and most exciting track day cars there is. 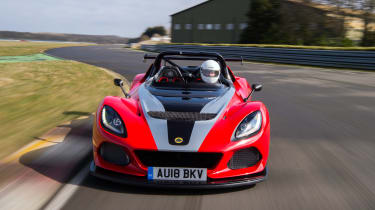 The Lotus 3-Eleven is the British brand’s ultimate track day machine. Light, powerful, aerodynamically enhanced and shorn of all fripperies it is one of the most exciting and intoxicating machines out there. Yet after a couple of years of production Lotus is pulling the plug, but not before giving the car a fitting send off in the form of a more powerful limited run (just 20 will be built) model. Called the 3-Eleven 430 it not only goes faster in a straight line, it gets more downforce – and as a result it’s the fastest road going car to lap Lotus’ Hethel test track.

It looks as wild as you’d expect a dedicated track star to. There’s no roof, no doors and the windscreen is nothing more than an upturned lip ahead of the driver and passenger. There’s a huge wing at the rear that generates lots of down force, plus a longer front splitter. Completing the racer look is the MSA approved roll cage and a set of forged alloy wheels.

Inside, you’ll find an extremely simple and elegant interior that’s geared towards one thing and one thing only: driving. The thinly padded carbon fibre seats are new and make up the bulk of the 5kg weight-saving over the previous model (Lotus quotes a dry figure of 920kg), while ahead of the driver is a an almost infinitely configurable TFT display. Next to this is a small carbonfibre panel that houses the start button, battery isolation switch and the headlamp controls and, well, that’s about it. 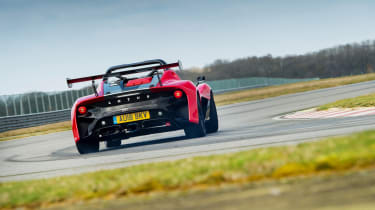 It all helps add to the sense of pared back purity, one that extends to the driving experience. Few cars are as communicative and involving as the Lotus, while the 430bhp supercharged V6 means few are as fast. This is one of those cars that serves up the thrill of driving by the superunleaded gallonful.

Being based on the standard 3-Eleven, the 430 gets the same Elise derived extruded aluminium chassis that features an MSA approved rollcage and is covered in an all carbon-fibre body, However, the 430 benefits from a new rear wing that sits 50mm higher than before, and that works in combination with a longer front splitter to create 265kg of downforce at the top speed of 180mph – a 44kg increase over the old car.

The chassis is the same layout as before, with unequal length double wishbone suspension and Michelin Pilot Sport Cup 2 tyres (225/40 R18 front, 275/30 R19 rear). Our car was also kitted out with the full track attack options list, which ran to Ohlins TTX two-way adjustable dampers (£2500) that replaced the one-way standard items and adjustable anti-roll bars (£1000). 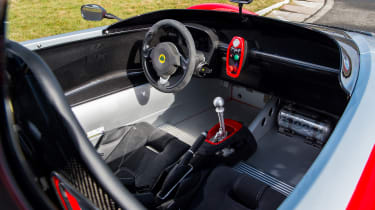 As you’d expect from Lotus, the 3-Eleven has been treated to another weight reduction programme. The gains are small, but by making carbonfibre seats standard fit, 5kg has been shaved from the total, bringing the kerbweight down to 920kg. Select the titanium exhaust and you’ll save another 5kg.

There are no hi-tech stability control systems on the Lotus, instead it features a six-stage, motorsport-inspired traction control system. Drivers can dial back the electronic intervention depending on their confidence and the track conditions.

The supercharged 3.5-litre is the same used in the recently revealed Exige and Evora 430 models, which means 430bhp at 7000rpm and 325lb ft of torque at 4500rpm. Even with your head inside a helmet the engine sounds good, particularly when played through our car’s titanium exhaust. It’s not a sonorous, operatic unit, but its gruff and mechanical growl that grows to an angry blare certainly gets the blood pumping.

> How to choose a cheap track day car

Lotus claims the 0-60mph sprint takes just 3.1 seconds, and below 100mph the 430 feels like its got the explosive energy to keep pace with most supercars, and while the bluff aero pegs the car back a little as speeds rise, it still has the puff to keep you pinned to that lightweight seat. Better still, that supercharged delivery means the amount of acceleration is directly proportionate to the position of your foot on the throttle – there’s no lag or delay, just instant and electrifying urge the moment you plant your right foot. 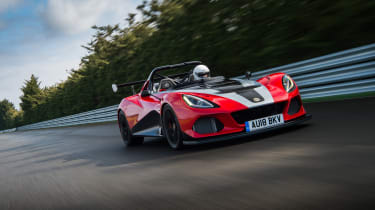 On track it makes for a sensational turn of speed as you wring out every last rev before butting into the limiter at 7000rpm. On the road there’s so much pace in reserve that you simply short shift and surf the torque, comfortable in the knowledge that even with less than 4000rpm dialled into the rev counter you’ll be the fastest thing on the road.

The six-speed transmission is another highlight as it benefits from a precise and mechanical shift that has you swapping cogs just for the hell of it. And because it’s connected to a light clutch it’s a doddle to use when you’re just taking it easy.

In one word: sensational. As a track car it manages to be both stupendously fast and approachable. Whether you’re hardened track veteran or circuit novice there’s something for you to enjoy in the 430. Our car was set-up with all its adjustable suspension bits in medium, and for most people most of the time that’ll do just fine.

It’s the steering that gives you the first hint that the 430 is going to be a bit special. The small wheel requires real muscle at low speed. Get moving and the effort required diminishes but it still feels meaty and connected, delivering a richly detailed commentary that tells you precisely how much grip there is to play with. There’s bags of grip too, those sticky Michelins clinging on with breathtaking tenacity when warmed through (Lotus reckons 1.5g of lateral grip is available). Through rapid changes of direction the Lotus delivers outrageous grip and composure, while through really fast corners it feels locked on its line with just the slightest whiff of confidence-inspiring understeer.

Yet what’s really remarkable about the Lotus is how capable it is on the road. With no roof or windscreen there’s the odd fly in the face moment, but the trade-off is a level of sensory immersion that few cars can deliver. With no glass or pillars to get in the way you get a panoramic view, while your ears hear so much more - the whine of the supercharger, the occasional sigh from the intake system and the clattering of stones as they’re fired into the bare arches.

It’s explosively fast too, but in a different way. Corners and roundabouts are dispatched with a low roll, low inertia disdain and even at 50 percent effort the Lotus will be the fastest thing on the road. What’s really remarkable, though, is the ride. Yes there’s an underlying firmness, but so beautifully judged is the damping that the 430 glides where other track day specials would leave you with double vision and a chiropractor bill to match the car’s price.

At £102,000 the Lotus 3-Eleven 430 is not a rational purchase in any way, shape of form. Yet like the equally mad Caterham 620R (£50,900) and BAC Mono (£74,950), the Lotus defies logic and instead appeals to those who seek the ultimate in driving thrills. This is a car that will make mincemeat of most track day opposition, yet it’s also hugely approachable and incredibly rewarding, even when driven at normal speeds. Yes it requires commitment to drive on the road, certainly in terms of its lack of weather protection, but if you’re dropping this kind of cash on a track car then it’s extremely unlikely to be your only set of wheels. With just 20 being built demand is likely to be high, but those lucky enough to get the keys to one will be in for a real treat.