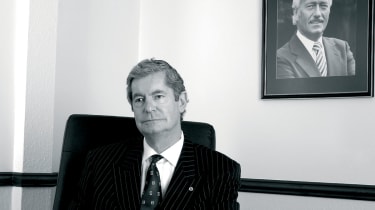 From the outside Lotus looks to be in a precarious position. Owner Proton is subject to a takeover bid, and while the Malaysian company’s homeland state-of-the-art manufacturing plant has huge appeal for potential buyers, a small, specialist sports car maker with a dodgy financial past, based in rural Norfolk, could seem like unwanted baggage.

Lotus CEO Mike Kimberley (image) confesses that he isn’t party to the machinations of the Proton takeover but he is adamant that whatever the outcome, Lotus has a future. In fact, he believes the company is now as strong as it has ever been – it has returned to profitability and plans to launch an all-new 2+2 at the London Motor Show in 2008 and the Esprit replacement a year later.

Debts clearedKimberley’s optimism is founded on the fact that earlier this year the company’s shareholders agreed to recapitalise Lotus, effectively writing off £60million of accumulated debt. ‘It’s allowed us to clear the decks, to start anew,’ he explains, pointing out that if there hadn’t been confidence in the company’s future viability then such an action wouldn’t have taken place.

Debt elimination, however, is only a means of clearing up past mistakes and, since his return to Lotus in May 2006, Kimberley has been ‘busy’ turning the company into a profitable entity. ‘We’ve been through a period of painful right-sizing,’ he says, ‘and managed to bring down the break-even point from 6000 units to 3000 a year.

‘Production is now tailored to demand – we’re selling 65 cars a week and we’re making 65 cars a week. We’ve eliminated the build-up of stock, particularly in the US where the situation was out of hand and unsustainable. There’s a need to refocus Lotus on being a niche company, small enough that a ‘can do’ culture can flourish, as it did in Colin’s (Chapman) day.’

In March this year Kimberley presented the main Lotus board with a five-year strategic plan, the first time that the company has applied such a discipline. Kimberley insists that ‘you have to have a long-term vision and then stick to it’. One part of his plan has had to be dropped already, though – a Lotus-tuned version of the Proton Satria has been put on hold because of the uncertainty over who will buy the Malaysian company.

New 2+2 Kimberley is clearly passionate about Lotus’s forthcoming models, starting with Project Eagle, a 2+2 designed to sit between the Elise/Exige/Europa and the new Esprit, and due to debut at next year’s London motor show, on sale early in 2009. Teasingly he grants me a quick glance at pictures of the Eagle, which appears to be a mid-engined coupe with (very) occasional rear seating. Think Bertone-bodied Dino 308GT4 with a modern Lotus twist and you won’t be too wide of the mark. Price is likely to be sub-£50K.Unlike the Europa, the Eagle isn’t based on an Elise platform but it will use a bonded aluminium tub and glassfibre composite body. Kimberley won’t confirm where the engine’s coming from, but doesn’t argue with the logic of our guess at a Toyota unit, most likely a 3.2-litre V6 with about 300bhp.

Aston engine? Kimberley is less helpful regarding the power source for the next- generation Esprit, set for launch in late 2009, other than to say that he’s very excited about the deal Lotus has sealed with ‘a very well respected prestige car maker’. There’s been much speculation that the engine will be a BMW unit, but given the relationship Lotus has with Aston Martin – it designed and set up the alloy chassis and suspension of the Vanquish – and the desire to be ‘niche’ and ‘exclusive’, an Aston V8 would fit the bill equally well.

When we interviewed Kimberley in 2006, he had just reviewed progress with the Esprit and decided that it wasn’t extreme enough. It seems that the car’s dynamics are now much sharper, ‘more Lotus’, as befitting Hethel’s flagship £70,000 supercar.

Lotus EngineeringWhile all this has been going on at Lotus Cars, Lotus Engineering has been restructured and ultimately will be run as a separate outfit. It already has several Chinese-market projects on the go as well as half a dozen in the expanding Indian market, including a joint venture with an un-named Indian car-maker. Such is its confidence that Engineering has been able to poach Paul Newsome from Jaguar as MD.