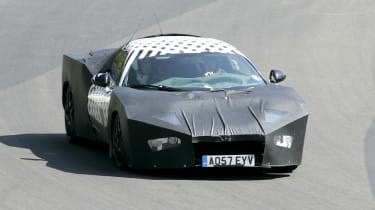 Code-named 'Eagle', the Lotus newcomer has been snapped undergoing handling tests at the German Nurburgring.

It will be powered by a mid-mounted 3.5-litre petrol engine borrowed from Toyota, and the V6 unit will drive the rear wheels alone. Taking a mass-produced engine from the shelf of a big car maker has two big advantages: first, of course, is that Lotus’ own engineers can fully concentrate on other important things of the car like chassis and safety. The second weighs even more: a modern, mass-produced engine is the guarantee to pass strict EU and US emission regulations at an affordable price. We might see a concept of the new car at the British motor show in July this year.