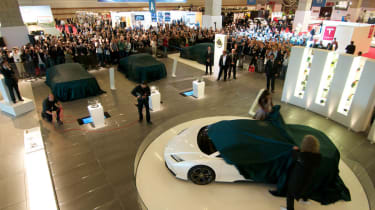 Lotus won’t be at the 2012 Paris motor show. The last Paris show, in 2010, heralded Lotus’s ‘rebirth’, with a grand unveiling of five key new models in concept form, their covers whipped off by various celebrities. Two years later, Lotus’s then CEO, Dany Bahar, has left the company and plans for a new Esprit, Eterne, Elite, Elise and Elan – all revealed at Paris 2010 – appear to on hold. Former Red Bull and Ferrari executive Bahar was sacked at the end of a two-week suspension while his conduct in his job was investigated by parent company DRB-Hicom. And resulting concerns for Lotus’s health haven’t been eased by reports it won’t have a stand at one of 2012’s key motor shows. Lotus had a very prominent stand at the 2012 Goodwood Festival of Speed, however.