Lotus Elise Cup 250 - Lighter, more powerful, and faster than ever 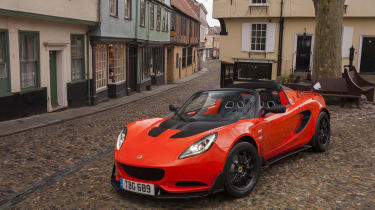 Lotus has revealed its quickest Elise yet, the Elise Cup 250. Based on the Elise Cup 220 – a car we awarded five stars on our drive last year – the 250 model features several improvements that should make it even better.

In true Lotus fashion, the Cup 250 has been made lighter than its predecessor. Forged alloys save 1.5kg, carbonfibre-backed seats another 6kg, and a lithium-ion battery reduces weight by 10kg. This all helps towards a total weight of 931kg, 21kg lighter than the previous Cup 220. If that’s still too heavy for you, the front splitter, rear wing, diffuser and side sills can be replaced with carbonfibre items, slashing another 10kg.

The body kit, taken from the Cup 220, gives the car a much more purposeful look than a standard Elise, but also benefits aero, with 66kg of downforce at 100mph. However the Cup 250 has a higher top speed, bringing the total possible downforce to 155kg at 154mph.

We were unsure if the previous 220 Cup should have been named an Elise, as it was only available with a fixed roof – something that would previously have made it an Exige. There’s no confusion as to whether the 250 Cup is a proper Elise though, as it comes standard as a roadster, with the option of a hard top. 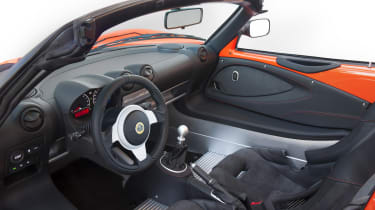 It’s disappointing not to see the exposed gear linkage that made its debut in the updated Exige V6 recently. Real improvements were made to the precision of the shift in the Exige with the new linkage, but sadly it seems the 4-cylinder Elise won’t be getting this tighter, and infinitely cooler, exposed linkage just yet.

The suspension and brakes remain the same as the Cup 220, also shared with the Club Racer are Eibach springs, adjustable front anti-roll bars, Bilstein dampers, AP Racing front calipers and Brembo rear calipers. Unsurprisingly for a Lotus, we were impressed with the way it drove:

‘Despite the extra grip, the nice thing is that the car hasn’t been made unapproachable. Push the tyres to their limits and the balance is easy to massage. The nose pushes progressively initially and it’s then up to you how things develop; if you’ve nailed the corner just right then you’ll be able to unwind the steering at the apex and feel the weight transition smoothly to the tail of the car as you accelerate out to the exit kerb.’

We’ll see how that changes the characteristics of the car when we drive it. Hopefully it will still maintain its transparent and approachable nature. The Cup 250 makes its debut in April.