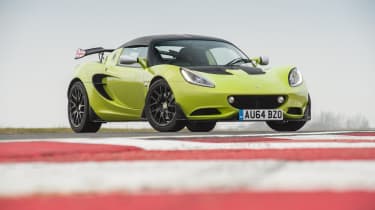 The Lotus Elise S Cup is the road-going version of the S Cup R race car. Using parts from a mix of fast Elises, it features the sport suspension from the Club Racer and the Cup R’s single rear exhaust and aero package, which comprises of a front splitter, winglets, barge boards, rear wing and diffuser. Arguably it is the most serious road-going Elise ever. Although arguably it’s not even an Elise, because in the name of smooth airflow it’s got a fixed roof… and surely that makes it an Exige?

This Elise has the 217bhp, 184lb ft supercharged 1.8-litre four-cylinder engine from the Elise S. With just 217bhp pushing 932kg, acceleration isn’t rabid, yet it feels fast enough when you’re that low to the ground.

The instant torque from the supercharged engine means that you can also enjoyably exploit the exit of corners, playing with the car far more than I remember wanting to in the past. The Sport setting even provides a nicely judged safety net. The only thing that doesn’t like track work so much is the gearshift, which still feels slightly stringy and loose when rushed. Lotus says that only 4.2 seconds are needed for the 0-60mph sprint, with the top speed claimed to be 140mph.

Sometimes claims about aero benefits can seem a little hollow, but there are a couple of reasons to be less sceptical of the S Cup. For a start, no one puts a rear diffuser that aggressive and that ugly on an otherwise delicate-looking car unless it’s going to do some good.

Second, we know that Lotus can back up the bodywork with numbers. At 100mph the S Cup produces 66kg of downforce. That’s compared with just 5kg of downforce on a standard Elise S. As you’d expect, the gap only widens as speeds increase, with 125kg playing 8kg at the S Cup’s top speed. These gains have been made with only an eight per cent increase in drag. 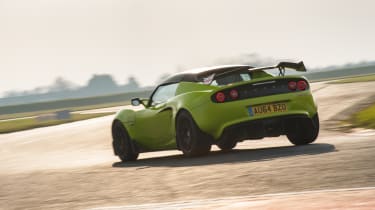 On Bedford Autodrome’s South Circuit, the Toxic Green Elise is simply phenomenal. Despite the extra grip, the nice thing is that the car hasn’t been made unapproachable. Push the tyres to their limits and the balance is easy to massage. The nose pushes progressively initially and it’s then up to you how things develop; if you’ve nailed the corner just right then you’ll be able to unwind the steering at the apex and feel the weight transition smoothly to the tail of the car as you accelerate out to the exit kerb.

If you’ve committed too much on the way into a bend and need to lift, then the back will step out in a more markedly mid-engined fashion. I’m half-expecting the S Cup to be a compromised proposition as we head onto public roads, but remarkably I enjoy it even more. The roads are cold but dry as I drive home in the evening and then frosty and slippery the following morning – the Elise is huge fun on both occasions.

RivalsThe cheaper Porsche Cayman or Cayman S are both options at this price point, with the Cayman S a little over £5000 more expensive than the Elise S Cup in basic specification. Both Porsches are less extreme than the Lotus, however. Alfa Romeo’s 4C, with its carbon tub and 895kg kerb weight, is another interesting contend

PriceLotus has priced the Elise S Cup at £43,500 for the basic model; a £6000 price hike over the regular S. Ultimately the biggest reason not to choose an S Cup is if you think you’ll miss the ability to remove the roof.