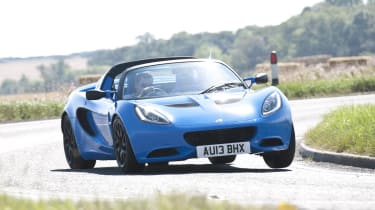 The Lotus Elise S Club Racer. It’s a mixture of the two most exciting Elises on sale, the stripped-out Club Racer and the supercharged S. In many ways it’s the car we’ve all been waiting for, as the original, naturally aspirated Club Racer promises a lot, but falls short of delivering as much as we’d hoped. Its mild-mannered 1.6-litre engine is sweet, but not man enough to pull an overly tall set of gears with any conviction. Applying the Club Racer ethos to the significantly more potent Elise S should finally make good on the promise. It’s priced from £35,600.

Straight out of the box the £35,600 S Club Racer weighs just over 15kg less than a standard S. Those weight savings come by not having the stereo (-4kg), sound deadening/carpets (-4.5kg) or even a roof (-5.9kg) as standard. Delete option the airbag and that figure jumps to the best part of 20kg, and saves you £600. Further weight savings come from spending money on things like forged alloys (-1.5kg), a lightweight battery, carbon airbox and sports exhaust, which is supposedly track-only. You can save a further 0.06kg by having a lightweight badge. Go for the lot and you’ll save a little over 28kg.

The 1.8-litre supercharged four-cylinder engine possesses 217bhp and 184lb ft, figures similar to a mk6 VW Golf GTI in something that weighs around 400kg less. That means 0-60 in around 4.5sec and a top speed of 145mph, figures significantly improved over the basic Elise Club Racer.

The name and obsession with weight suggests the Club Racer is a track-biased car, but as its underpinnings are standard Elise S it makes for a fine road-going sports car. The supercharged 1.8-litre Toyota engine delivers a brilliant blend of low and mid-range torque combined with a voracious appetite for revs. It sounds good too, with just enough supercharger whine to sound like it means business, but not so much that it sounds like a bench saw. You even get some crackles and pops from the exhaust.

As the Lotus Elise has evolved, it has gained firmer suspension and wider tyres. In the S this makes for a more aggressive feel, with serious grip and fist-tight body control. There’s still the trademark pliancy for which Lotus are rightly lauded, and the steering is constantly chattering away, informing you of the most subtle surface changes and cambers, but stopping short of bombarding you with unwanted kickback. Grip levels are high, so you really need to push hard before you feel either end begin to relinquish its hold of the road, but because there’s so much feel the car doesn’t exclude you from the work it’s doing.

Balance-wise the S Club Racer is resolutely neutral up to and beyond any sane speed you’re likely to carry into a corner on the road. It’s a remarkable sensation to explore its abilities, working closer and closer to where you think the limit lies, only to find it has more in reserve. With the roof removed you know you’re working the Elise hard when the unmistakable tang of hot tyres permeates the cockpit. This really is a car that engages all your senses.

The six million dollar question is do you notice the Club Racer weight savings? Honestly that’s hard to say. I’m sure if you stepped out of a regular Elise S and into a Club Racer with all the weight saving options (and delete options) then you probably would.

As the Elise sits in a middle ground between out-and-out track cars and more luxurious roadsters, rivals range from a £27,995, 180bhp Caterham 7 Supersport R or a £38,000, 310bhp Ariel Atom 3.5 Supercharged to a £38,237, 261bhp Porsche Boxster 2.7, depending on your planned usage. The former two will serve up richer thrills, but neither will feel as friendly as an Elise when the weather turns wet and you simply need to get somewhere with little fuss. The Boxster, meanwhile, is a truly everyday car that is also superbly balanced. Bit big next to an Elise, though…