The Lotus Elise S range gains a cheaper, lighter variant in the form of the second Club Racer model 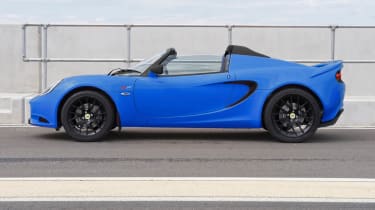 Lotus has unveiled its new Elise S Club Racer in time for a Goodwood Festival of Speed debut. It’s the fourth variant of the third-generation Elise and the second Club Racer model.

It follows the same philosophy, applying weight loss and a sharper focus to the supercharged Elise S. Up to 20kg is cut from the roadster, taking its kerb weight down to 904kg, 52kg more than the basic 1.6 Club Racer. The cuts come thanks to lower equipment levels (air conditioning, radio, carpet mats, central locking and some sound deadening have been removed) and a smaller battery, with an 8kg loss optional via dealer-fit options such as a TRD air box and a sports exhaust.

The Elise S uses a Toyota-sourced 1.8-litre supercharged four-cylinder engine, serving up 217bhp and 184lb ft. Thanks to the Club Racer’s slimmer hips, its 244bhp/ton power-to-weight ratio is 5bhp higher than its base car’s, allowing a 4.2sec 0-60 time (down 0.3sec) and a 145mph top speed, which is unchanged.

The Elise S Club Racer is aimed at ‘Lotus purists and trackday enthusiasts’, and will come with a variety of ‘funky’ colour schemes. Priced from £35,600, it is £400 cheaper than the Elise S it’s based on. Though with all the deleted equipment available as cost options, pick and choose a few extras and the Club Racer ends up more expensive, perhaps highlighting its slightly heavier brother as better value.

The new Club Racer will be on Lotus’s 2013 Goodwood Festival of Speed stand, alongside the rest of the Lotus range – including the Evora S Sports Racer and new Exige S Roadster – and a Kimi Raikkonen liveried Lotus F1 show car.

Values of the original Elise are on the move, so if you’re after one don’t hang about. Let evo’s guide help you identify your perfect Lotus lightweigh…
Lotus Elise Classic Heritage Editions celebrate past Grand Prix legends

Most focused Elise is still a fantastic road car, and its light weight and simplicity feel more relevant than ever