Highlights of the 2013 Goodwood Festival of Speed, including Porsche 911s and the new Pikes Peak record holder 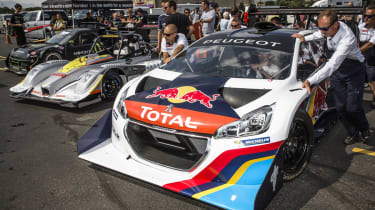 This weekend sees the 2013 Goodwood Festival of Speed take place. It’s the event’s 20th birthday, too.

One of the key attractions will be the Peugeot 208 T16 Pikes Peak car. Driven by World Rally champion Sebastien Loeb, it smashed the record for the famous hill climb at the end of June with a time of 8min13.878sec. Celebrations for the Porsche 911’s 50th birthday will continue, too, with a variety of sports cars on display including Porsche’s Project 50 racing car.

The Ferrari F12 Berlinetta will make its first appearance at the Festival of Speed, while the brand new mk3 Skoda Octavia vRS will be seen for the first time (and evo will be driving it, too). The Toyota FT-86 Open Concept, with the company seeking reaction to a potential GT86 Convertible.

Touring car stars Gabriele Tarquini, Matt Neal and 2012 BTCC champion Gordon Shedden will be driving the famous hill climb on behalf of Honda while, on a different note, soapbox racers will make a welcome return to Goodwood, after last running in 2004. They will run a demonstration down the hill and be on display for the rest of the weekend.

evo's Harry Metcalfe previews the 2013 Festival of Speed below