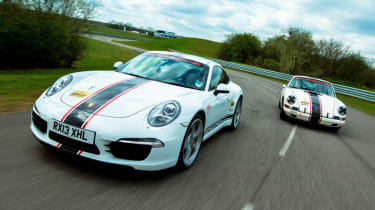 Porsche’s Project 50 911 is set to star in a three-day, nine-circuit charity road trip. Gordon Robertson, the chief driving consultant at the Porsche Experience Centre at Silverstone, will drive the race-spec 1965 Porsche 911 from his home town of Doune, Scotland to the Goodwood motor racing circuit in Sussex ready for the Festival of Speed. The project, titled ‘The Long Way Doune’, raises funds for the Ninewells cancer research charity. The run will take place from July 8 to 11, with Knockhill, Croft and Oulton Park scheduled for the first day, followed by Donington Park, Mallory Park, Silverstone and Brands Hatch on day two. The final stretch will see the car run from Thruxton down to the finish at Goodwood. A 991-generation Porsche 911 Carrera S in identical livery will be driven by technicians from the Porsche Experience centre to provide support for the Project 50 racer. Special guests will also join Robertson during the trip to help raise funds for the charity, which is close to his heart after he was diagnosed with medullary thyroid cancer in January 2012. ‘Luckily, after intensive radio therapy, six weeks later I was back on the road again’ said Robertson.

Click here to donate to the Project 50 fund Project 50 is a 1965 911, brought out to play by Porsche Cars GB to celebrate 50 years of the iconic sports car and designed to compete in a variety of historic races. Its 2-litre flat-six engine produces 128bhp and although the car reflects the spirit of 1960s motorsport regulations, it is fully road legal. It will be joined on the tour by an original 1967 911 which itself is on a ‘World Road Show’, crossing five continents on its way to the 2013 Goodwood Festival of Speed.

Buy your own classic Porsche 911