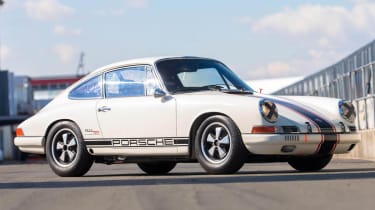 Porsche is celebrating the 911’s 50th birthday with a special racing car. The Project 50 911, which is being run by Porsche GB from its UK headquarters, will compete in a number of historic racing events – including the Nurburgring Oldtimer and Silverstone Classic - throughout 2013. A variety of guest drivers – some intrinsically linked with Porsche – will be given driving duties. The Project 50 car is a 1965 short-wheelbase Porsche 911, with a 2-litre flat-six engine producing 128bhp behind its rear axle. Such size and power seems diminutive when compared to modern Carrera, GT3, Turbo and GT2 models, which range from 345 to 611bhp, but was more than enough to endow the 911 with its tricky reputation. Porsche itself acknowledges this with a rather well put quote: ‘to drive fast, a 1965 911 undoubtedly demands a particular level of commitment behind the wheel; this dynamic flair remains discriminating to this day’. The drivers so far confirmed to drive the Project 50 911 are of pretty high calibre, then. Richard Attwood (pictured, right) won the 1970 Le Mans 24 hours with Porsche while Barry Horne was the 2003 Carrera Cup GB champion. The Project 50 911 was built in September 1965, and was sold to an Italian buyer – with right-hand drive a curious option – for £3438. It was imported into the UK from America in the 1990s, at which time it was converted to an FIA-compliant racing car. Before the Project 50 races begin, it will get a through check-over at the Porsche Classic workshop in Stuttgart.