Lotus Elise Sprint 220 review – is this the sweet spot in the Elise range?

The Lotus Sprint 220 is a rewarding, involving car but that iconic badge comes with a heavy price. 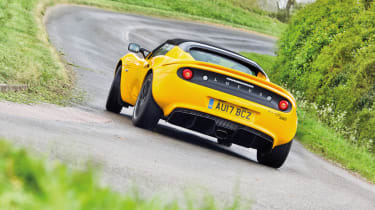 A Lotus wearing the Sprint badge has to be pretty special. Step up close to the Elise Sprint and you’ll see that it is, with an impressive amount of high-quality, gloss-finish carbonfibre lavished on it. The engine cover is made entirely from the lightweight material, as is the roll- hoop cover and the vented bonnet panel. Swing open the door and there’s more of it on the sills; you’ll also spot the open linkage for the gearshift and a blanking plate where a radio head-unit should be.

It looks like a comprehensive weight-saving programme and it is, though some of the measures that help the car to its impressive kerb weight are general improvements enjoyed by other models in the new Elise lineup. ‘Sport’ is the standard Elise trim level and those models also benefit from the open gear linkage and integral weight reductions, including the revised, lighter front clamshell and new-look rear panel with only two round tail lamps. So making the Sprint even lighter requires more exotic solutions, hence the lovely carbon parts.

The Sprint 220 is identical to the 1.6 Sprint apart from its engine and weighs about 50kg more. Its version of the Toyota in-line four is a 1.8-litre and comes with a supercharger: it’s this and the associated plumbing and radiators that account for the extra mass. With 217bhp on tap 0-60mph is dealt with in 4.1sec.

The headline weight you may have seen for the Sprint is 798kg, which gets the car back onto the same page as the original Elise of 20 years ago. This figure is for the non-supercharged, 134bhp, 1.6-litre Sprint, not the Sprint 220 tested here, and the sub-800kg figure has been made possible by lighter parts and a bit of technical limbo-ing; 798kg is a ‘racing’ dry weight, that’s to say the weight of the car with all of its vital fluids, such as engine oil, brake and clutch fluids, but an empty fuel tank.

In addition to those lovely carbon panels and a polycarbonate rear screen that save a total of 6kg, the Sprint also comes with a lithium-ion battery (saving 9kg), carbon shell seats (6kg) and forged alloy wheels (5kg) for a total saving over the Sport 220 of 26kg, or about three per cent. Its dry weight is 851kg and its with-fuel kerb weight 878kg, which, however you slice it,

If you struggle to get into an Elise with the roof on, you might appreciate the 10mm drop that the lovely (optional) carbon sill finishers bring; their dimensional accuracy allows them to be fitted closer to the extruded aluminium beneath. The slim seat is comfortable and supportive and (optionally) is matched with Alcantara door casings and facia trim, with contrasting yellow stitching. 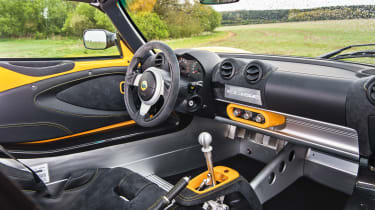 Thumb the starter button and the engine assumes an unexpectedly sonorous idle. Lotus says that it has spent a lot of time on the sound and boldly states that it has created ‘the best sounding four-cylinder car in production’. It’s certainly one of the most characterful fours, with a lovely, rounded bass quality that gives it an almost retro feel, as if it’s breathing through carbs. It’s a very willing engine too, its strong pick-up helped by the lower mass and well- chosen gearing that means there’s always a solid response.

Unexpectedly for a car that sells on being lightweight, the steering is rather heavy, particularly at parking speeds. In the dry the chunky, Lotus- tuned Yokohama Neovas (175/55 R16 front, 225/45 R17 rear) give immense grip, especially when they’re warm, and the Sprint feels balanced and slingshots into and out of corners like a race car. The quality of the road surface hardly seems to matter because, as ever, the ride is very impressive. Not only is it remarkably supple but there is no bump-thump noise either, which helps give the dynamics a very satisfying sense of quality. There’s really no surface it can’t neutralise, although the front tyres can be distracted by cambers on heavily crowned B-roads.

In the damp the traction control can be quite busy, which is not unexpected given the combination of the torquey engine, short gearing and low mass. Turn off the traction control and the weighty steering can feel like it’s restricting your options a little, asking for a fair bit of muscle to react to small kicks of the tail on the exits of corners. You wouldn’t expect the sporty tyres to be great in the rain, yet the Sprint is wonderfully benign on soaking asphalt, the breakaway being very gentle and the supercharged engine allowing precisely measured power delivery to make things rewardingly smooth. The engine has quite an open-pipe sound in the mid-range, and the note thins out to a slight crescendo ahead of a soft limiter, there for if you miss the shift lights in the centre of the rev counter. Cruising can be a little wearing though, as the motorway speed sets the engine close to its boomiest point, 3000rpm, and there’s no radio to resort to.

With the Sprint, Lotus has worked hard to make a light car even lighter, and the buyer has to show quite some commitment too: the Sprint is £5000 more expensive than the Sport, and all of the items that make it a Sprint are optional on the Sport. It’s a rewarding, involving car but that iconic badge comes with a heavy price.