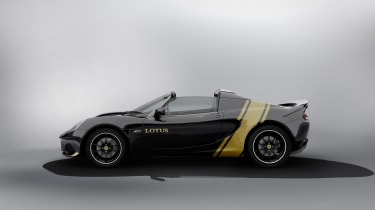 Lotus could give the Mazda MX-5 and Austin Mini a run for their money on sheer volume of special editions, but when you have a long and illustrious racing heritage to call upon, it’s perhaps no surprise the Elise has received so many colours and stripes over the years.

The latest are sold under the banner of the Elise Classic Heritage Edition line, with four new models based on the Elise Sport 220 referencing famous racing cars of old. Production will be limited to only 100 cars in total across all four (demand will dictate the proportion of each), with pricing set at £46,250. That’s £6350 more than the regular Sport 220, but carries, according to Lotus, nearly twelve grand’s worth of extra kit.

The four models are inspired by four of the brand’s iconic race cars. The red car with gold and white striping takes its colours from Graham Hill’s Lotus Type 49B in Gold Leaf livery, which arrived right at the transition from cigar-shaped racers to those with aerodynamic wings. It’s a livery Lotus has referenced with a special edition before, and arguably more successfully, with both the S1 and S2 Elises available in full red and white Type 49 colours.

So too has Lotus previously cribbed a colour scheme from the next special edition, based on the Type 72D driven by Emerson Fittipaldi in 1972. Like the Elise Type 72, the latest Classic Heritage Edition gets black paintwork and features gold inserts to the seats, but trades the old car’s gold wheels for black, and instead adds gold exterior striping – albeit not the tasteful pinstripes of the Grand Prix cars. 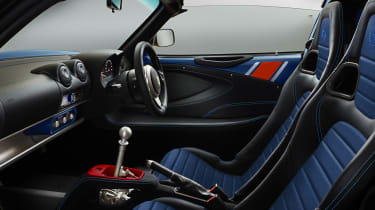 Next is a blue, red and silver variant, inspired by the Lotus Type 81 as driven by Nigel Mansell, Elio de Angelis and Mario Andretti – one of the firm’s less competitive F1 cars, but certainly one blessed with an eye-catching livery.

The final Classic Heritage Edition will no doubt tug at the heartstrings of some, for its dark blue and white livery takes its cues from the Lotus 18, which made its debut at the 1960 Argentine Grand Prix and was driven by, among others, the late Sir Stirling Moss. Just a few races later, at the 1960 Monaco Grand Prix, Moss drove it to pole position and then to its first victory. 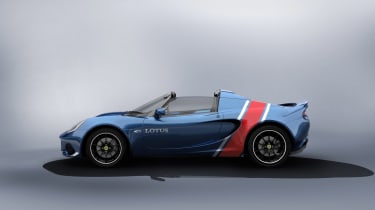 Moss won at Monaco again in 1961, and it’s this car that’s perhaps best remembered as Lotus removed the side panels for the race – something done to help keep the driver cool. The equivalent Elise (perhaps thankfully) retains its doors, though among the additional equipment fitted to these specials is air conditioning, which Moss probably would have appreciated in 1961. Being an Elise, you can of course remove the fabric roof, too.

As well as the colour schemes, the extra equipment on each car includes DAB digital radio, cruise control, forged alloy wheels, two-piece disc brakes, and an interior carpet. Each car’s interior has been colour-matched to its special livery. Some items remain on the options list, including a glassfibre hard-top, a lightweight lithium-ion battery, and a titanium exhaust system.