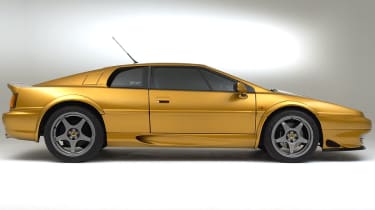 It goes without saying that any car on your shortlist should have a complete and thoroughly detailed history, carrying the stamps of either a Lotus dealer or a recognised independent specialist. Many owners will know their cars down to a meticulous technical level, so you should also ask as many questions as you can and only buy once all doubts and knowledge gaps have been covered.

At this point we need to include our disclaimer. Yes, you can buy a V8 Esprit for the same initial outlay as a new hot hatch, but don’t think that running costs will be of the same order. They won’t. You’re still buying a £60,000 car, and parts prices will reflect that. And there’s no hiding from the fact that parts will now need replacing on a regular basis. Servicing can’t be ignored either. If a job needs doing, get it done. If you need to justify it on economic grounds, offset those costs against the depreciation that the hot hatch would inevitably suffer. That way, overall ownership costs can be broadly similar.

There was one recall for the V8, back in 1998, when the cars were fitted with new timing belts, idler pulley bearings, new clutches and fifth-gear locknuts at a cost to Lotus of at least £1500 per car. If you’re looking at an early car, make sure it had this work done.

EngineThe V8 engine, known as the ‘Type 918’, suffered a number of liner sealant issues in the first couple of years of production. These problems were a knock-on effect of overheating engines: the high temperatures caused the sealant to fail, which allowed water to get into the cylinders and mix with oil in the sump. This issue was cured in June 2000 when Lotus moved from Loctite 572 sealant to Hylomar 3400, but any engine built prior to this date may develop the fault if the remedy has not been applied.

The early overheating problems should have been cured on any car you are looking at now, but there are still some out there with pressure caps that fail to seal completely. Check the coolant level regularly; if there are losses it’s advisable to have the whole system pressure tested. Also check that the hose between the header tank and the expansion tank is not leaking air (some of the early clear-plastic versions did this) as this will prevent coolant being recirculated from the expansion tank.

Although at one time Lotus quoted a cambelt-change interval of 72,000 miles for the V8, this was later revised to 24,000 miles. Some specialists suggest that the belts can just be inspected at this interval (for around £400) and then changed (at additional cost) only if deemed necessary.

Remember that these are low-capacity, high-output engines and revving them from cold will seriously reduce their potential lifespan. The Garrett turbos last well, particularly if treated correctly, but if a turbo does fail an exchange replacement can be had for around £350.

Finally, we’d avoid any car that has had an aftermarket chip fitted to increase boost as the wear rates from the increased stresses are unknown.

TransmissionEarly V8s were fitted with a very heavy single-plate clutch that was difficult and tiring to use, so look for cars with the easily actuated twin-plate version. Clutches should last at least 20,000 miles, but this depends on how they are treated. Replacement is an 11-hour job as the gearbox has to come out. However, a worn clutch should be replaced at the first sign of slipping as damage to the flywheel will add to an already expensive bill of around £1000.

The Renault gearbox has never been the most satisfying to use, being cable-operated and not particularly accurate. It was revised in 1998 but the feel was little improved. It is strong and generally reliable, though. Shifting gear should require little effort – if it’s not smooth it’s likely that it just needs adjusting, but it could be a sign that the correct level of lubrication has not been maintained and the shaft has begun to rust. Shafts have been known to break if used hard. An exchange ’box will cost at least £1000 plus fitting, although Bell Performance offers upgrades with thicker shafts that eliminate the problem. Expect to pay between £2000 and £4000 depending on specification.

Radiator/petrol tankThe V8’s radiator is difficult to get at and its removal can result in damage to the oil cooler. Therefore a faulty radiator can leave you looking at a bill of between £1000 and £2000.

Petrol tanks often corrode at their base – they sit on felt, which can become saturated and rot the tank. The telltale is a smell of fuel in the cabin, which floats through from the inner sill near the seatbelt buckles. The tank is very difficult to get at and subsequently expensive to replace.

Suspension/brakesVery robust and reliable, springs and dampers on the V8 should last for around 100,000 miles. Occasionally the springs will show signs of cracking, meaning replacement is required, but otherwise there is little to worry about here.

The brakes last well due to the light weight of the Esprit. Obviously, wear rates vary, but there are no common problems. Complete replacement of the front Brembo pads and discs costs around £450 fitted. Check the operation of the handbrake, though, as it is expensive to fix.

Wheels/tyres/steeringIf the wheels have been kerbed it’s important to get the car’s geometry checked as it can easily go out of balance. It’s common for the insides of the front tyres to wear prematurely if this happens.

The steering rack is quite small for the job it’s required to do and therefore may need to be replaced every three years or so. This costs around £300 if you exchange it rather than buy new. Slack in the steering is the obvious sign that this is a job that needs doing – that or there’s a pool of oil under the car from a split gaiter.

ExhaustExpect to see a wide variation of exhausts – owners often go for aftermarket options to boost the sound. Look for stainless steel systems as they should last longer.

It’s not uncommon for the catalytic converters to fail, and, as there are two of them, replacing them can be pricey.

Bodywork/interiorThe good news is that despite being complicated the electrical systems in the Esprit rarely fail, and if there are problems it’s usually the cheap part that breaks first. For example, a non-functioning electric window is more likely to be the switch rather than the motor. The headlight pods can fail, but if they do it’s often nothing more than a short circuit caused by water ingress. Dry it out and the chances are everything will be OK once more.

The chassis is fully galvanized and therefore should not have any problems. If you see any rust it’s likely to point to poor repairs following accident damage. The bodywork is all glassfibre and should be in good order, although some of the paintwork on early cars may need a little TLC and possibly a respray.

The interior is generally robust, but ensure the air-conditioning system is working properly. The system can break down if the car hasn’t been used regularly and it’s expensive to fix.Back to Lotus Esprit main page