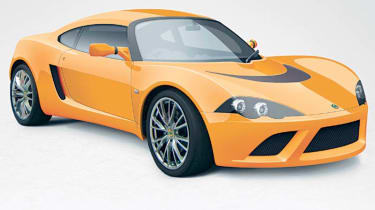 Next March at the Geneva motor show, Lotus will launch this two-seater coupe that will almost certainly be called the Europa, reviving a classic name from the company's past.

Based, inevitably, on the Elise structure, the Europa will be more of a Grand Tourer than either the Elise or Exige; it will be powered by the 2.2-litre four-cylinder Vauxhall engine from the VX220 to give a less frenetic driving experience than that offered by the high-revving Toyota VVT-i unit, and will be generously equipped by Lotus standards.

According to Lotus managing director Clive Dopson, who has been behind the wheel of development mules, 'the driveability of the car is excellent, more relaxed than that of the Elise. 'Even the suspension feels different thanks to greater isolation of NVH (noise, vibration and harshness), and it will be a far better proposition on the motorway. And it will be easier to get in and out of than the Elise.' Both Dopson and new(ish) Danish CEO Kim Ogaard-Neilsen insist that despite the slight shift in priorities with the Europa's set-up, it will retain the essential strands of Lotus DNA, so will remain a driver-focused car. 'However,' explains Dopson, 'Lotus is in danger of saturating the enthusiasts' market, so we must expand into new areas.' The Europa will also be a timely response to Porsche's Cayman and will help to keep existing customers within the Lotus brand until the arrival of the all-new Esprit, which is expected by the end of 2007 at the latest. 'The Esprit replacement is our number one priority,' says Ogaard-Neilsen, 'and all the work we're doing currently within the company and with our dealer network is in preparation for its launch.' With the basic ingredients of the Esprit now decided, a dedicated team of 160 engineers has just been assigned to the project. The key components of its chassis centre on Lotus's Versatile Vehicle Architecture (VVA), which uses cast aluminium corner pieces as its bedrock - chassis rails, crossbeams, and other parts of the platform can then be used to connect the corner pieces in a variety of lengths and widths depending on what sort of car you're intending to make. The Esprit, of course, will retain a mid-engined layout, but such is the flexibility of its VVA base, a front-engined saloon or even an off-roader could be spun off its platform. Though neither Dopson nor Ogaard-Neilsen will divulge any further details about the Esprit, it's expected to have a V8 in its middle and a price tag of approximately £60,000 - eight cylinders is essential for the all-important US market and the Americans are also more sensitive to 'base' prices than you might think. As for the car's shape, a sneaked glimpse of a clay model in the Lotus design studio suggests that the styling rendering pictured left is pretty close to the mark. Meanwhile, the Elise will be subject to gradual tinkering to keep interest in it alive. Dopson confesses that an all-new version isn't on the cards until some time after the Esprit is launched, but is confident that evolutionary upgrades and sharply-focused specials like the Circuit Car will keep the roadster fresh.