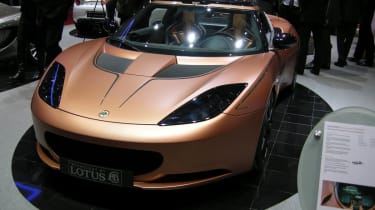 Lotus is taking a hybrid Evora to the Geneva motor show. And it’s not a throwaway attempt to garner the enviro-conscious car buyer; this is properly engineered stuff. The Lotus Evora 414E Hybrid Concept Car (rolls off the tongue, doesn’t it?) boasts a pair of 204bhp electric motors, one on each rear wheel, which solely power the car. The hybrid element comes from a 1.2-litre three-cylinder engine, which tops up the car’s battery resources but never powers driven wheels. Startlingly, each rear wheel receives 295lb ft of torque – the equivalent of a 911 GT3 RS at each side, or a Pagani Zonda F overall. A sub-four-second sprint to 60mph is possible, while the grunt is controlled via a torque vectoring system. It acts like an ESP system but uses energy recuperation rather than brake application. While just a single gear transmission sends the power to the back, there’s a sports mode that simulates the responses of a seven-speed paddle-shift gearbox to crank up the driver’s involvement. The addition of ‘Sound Synthesis’ tech means you get proper engine noise too, both for your enjoyment and pedestrian safety. You have the option of V6 and V12 engine noises, as well as a sound intriguingly tagged ‘futuristic’. The premise of the Evora’s drivetrain is that you hook the battery up to your house supply overnight to charge it up, then run electric-only (and emission-free) on purely battery power when you head out the next day. That’ll see you right for 35 miles; if you’re traveling further (or with much more gusto) that 47bhp 1.2 kicks in to top up the battery. It’s just a concept for now, and prior to Geneva we’ve just got a sneaky engine shot. Make sure you come back to evo.co.uk on Tuesday March 2 for live updates from the motor show and to find out more about the ‘E-Vora’. Click here for evo’s full Geneva motor show roundup See how the Lotus Evora does against the Nissan GT-R

Sitting alongside the more focused GT410 Sport, the new Lotus GT410 aims to offer greater practicality and comfort than before