The £58K price tag of the launch-spec Evora puts it square in the sights of an unlikely but hard to ignore rival: Nissan’s GT-R 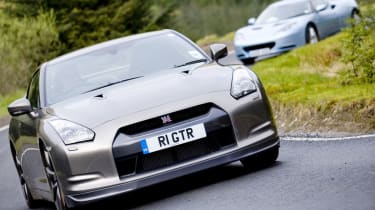 It’s the calculated brutality of the Nissan GT-R that stays with you. The utter focus with which it rips apart sections of tarmac, the single-minded dedication to the pursuit of speed, the sheer violence involved. It’s like nothing else – and it’s nothing like the Lotus Evora.

But you already knew that. One is a trillion-yen Japanese hypercar, the result of years of careful development; the other is built in Norfolk. One seamlessly blends the mechanical with the electrical, processor power controlling turbos, twin-clutch transmission and drive to each wheel; the other has a V6. From Toyota.

On what level can the Lotus hope to compete? It’s short two turbos, 200bhp, two driven wheels and two usable rear seats (2+2=2.5 in the Evora, it seems) – they’re fundamentally different cars. And yet compellingly comparable.

It’s Lotus’s fault we have the GT-R along. Its decision to price the basic Evora roughly five grand above our expectations and announce that the first 200 would cost £58,460 still looks ambitious. This top-spec GT-R Black Edition is £1500 cheaper, our reigning Car of the Year and, incidentally, the first proper UK GT-R we’ve driven. Each is of the moment, too. A hero car keyed into the current climate, the Nissan is a cut-price 911 Turbo (‘more a junior Veyron’ is John B’s assessment), while the Lotus is an ozone-friendly sports car that promises 32.4mpg.

The Nissan won’t do 30mpg. In fact on the long haul to Scotland it struggled to top 20, although the chief reason for that was my inability to resist tapping into the rich seam of power whenever the traffic on the M6 permitted. And that’s the first issue I have with the GT-R: it’s ability to add too much speed, too fast, is impossible to resist. I don’t think I’ve ever driven a car that makes the accumulation of speed so easy, so secure, so effortless. You know you’re travelling quickly, but you’re rarely aware of just how quickly until you look at the speedo – at which point you’ll realise you’re going 20mph faster than you thought and slam on the anchors.

Upon reaching the Highlands I detoured around the eastern side of Loch Lomond along a road called the Duke’s Pass. Quite why the Duke would want to pass along a road this tight and lumpy is beyond me, but it was a fitting test for the GT-R. It felt big and confined, never truly able to fill its lungs and stretch its legs, and yet it went about its business without so much as a joule of wasted energy, not a millimetre of unwanted movement – a legacy of the iron-fisted body control and a ride which, although thumpingly hard, never jars. It was an awesome performance, a cruel, deliberate dissection of a road that should have got the better of it.

That was a warm-up. Today the GT-R is making mincemeat of the three cars in our main group test. Driving it you feel like a cat toying with a bunch of mice – you can let them run off a bit and then reel them back in at your leisure. Speed isn’t everything, though, and this stunning ability has led to accusations that the Nissan is devastatingly effective rather than deeply involving. Wrong – it’s both.

But despite its capabilities the GT-R doesn’t tamper with the laws of physics – it does feel heavy after the Lotus and has to work harder to retain control. The Evora flows, dances, glides and sweeps along these roads. The GT-R stomps. It’s never clumsy, but it’s always angry, bellowing along, forcing its personality on you, always the dominant partner.

The Evora is far more laid-back, happy to dance to your tune, more accessible because you can push harder without the speeds becoming so ridiculous. It has the purer steering, the more communicative chassis and delivers a rich, satisfying, tactile, three-dimensional driving experience. It also has the better, lower driving position and a more adventurous, interesting cabin.

I have more confidence in the Nissan, though – mostly because it conveys the impression that it’s better than you are, but the natural front-engined balance is more manageable, the way it digs itself into the surface as you put the power down on the exit of corners is so reassuring and when it does lose grip (the rear is rather playful and the run-flat Dunlops do not like standing water) catching it is instinctive, immediate.

Ultimately the GT-R feels like it has been built for speed, the Evora for feel. Each reveals the other’s strengths and weaknesses: what the Evora gives you the GT-R can’t and vice versa. Choosing a winner is null and void.

Evora v Elise ‘The rear lights, the badge on the nose and a few widgets and grommets in between.’ According to Roger Becker, Lotus’s vehicle engineering director, that’s all the Evora has in common with the Elise. Not much, is it?

But is that really everything? The technology that the Elise pioneered – the bonded aluminium structure that’s so strong, light and versatile – has been carried over (albeit totally redesigned), and the two share transversely mounted engines that drive the rear wheels through manual gearboxes, as well as double-wishbone suspension all round. So the Evora does have a fair amount in common with the Elise, not least the way it drives. Lotus shouldn’t be afraid of admitting that, rather it should be a source of pride.

Now, I’ve always thought that a Lotus is characterised not by how it behaves in corners, but what it does in a straight line. You get the delicious feeling of letting the steering find its own path, a gentle writhing felt through your palms as the front wheels gossip their way over cambers, white lines and surface changes. You wouldn’t know more about the road surface if you Braille’d the tarmac with your own fingers.

That’s exactly what it feels like sat low (65mm lower than in the Evora to be precise) in Steven Kerr’s ’09 Elise R. It handles brilliantly without ever seeming to work hard at it. It picks corners apart with absolute confidence. The Evora is the same, perhaps a little more muted in its feedback and response, and there’s certainly much less noise from the engine, road and suspension, but in essence the level of detail, the communication from the chassis is very similar.

Which one is better to drive? The Elise. It delivers the higher highs, the 189bhp 1.8-litre engine is feistier, it’s a more absorbing, demanding car, hard-wired to your nerve ends. Especially with the roof off. The Evora is aimed at a new audience. This is an everyday Lotus, calmer and more refined, touring ability a given. It may not quite hit the handling heights of the Elise, but in the way it drives, rides, steers and communicates, the Evora is every inch a Lotus. Given that it weighs over half a ton more than the Elise, that is perhaps Lotus’ greatest achievement. Ollie Marriage