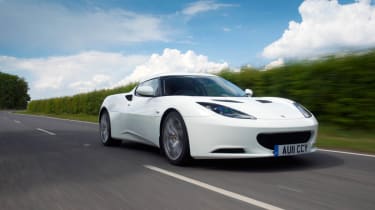 IPS stands for ‘Intelligent Precision Shift’, because this is an Evora with just two pedals and a pair of natty little paddleshifters tucked just behind the wheel. The Evora’s manual gearshift has never been one of its strongest suits, rather vague and occasionally obstructive, so you might well think there’s a gap in the market for a snappy, state-of-the-art paddleshift transmission.

Before you get too excited, this isn’t a twin-clutch system. The IPS has a regular torque-converter automatic, a Toyota unit to go with the mid-mounted Toyota-sourced 3.5-litre V6. It adds 54kg to the kerb weight (now 1436kg) and almost half a second to the 0-60 time, up from a claimed 4.9 to 5.3sec.

Doesn’t sound overly promising, but Lotus boffins have spent many months tweaking the software to give a more ‘involving’ drive. So in default ‘D’ mode it behaves pretty much like any regular auto, though with g sensors to stop it changing gear when you’re mid-corner. Flick a paddle and you have manual mode for the next 10 seconds.

In ‘Sport’ mode things get more interesting. Tug a paddle now and you have manual control for as long as you want it, and what’s more, the software prevents the box from shifting up even when you hit the rev-limiter. ‘Sport’ also simultaneously sharpens both the engine and transmission responses, while loosening the grip of the traction and stability control systems. It even speed-matches on downshifts – blips the throttle to you and me.

It’s weird, initially, to be driving a Lotus sports car with only two pedals (there hasn’t been any sort of auto Lotus since the Excel SA in the mid-80s). Once you get over the shock, the gearbox works… well, just like any other auto, albeit with slightly lumpier changes than the very best. If that’s to make the drive feel more involving, I’m not entirely convinced. Around town, though, and stuck in traffic, it’s slick enough and undeniably less aggro.

Out onto country roads and into ‘Sport’ mode, the Evora instantly feels happier. Changing gears manually, the speed of shift is, predictably, nowhere near the best dual-clutchers or automated manuals, but it’s not so tardy as to spoil your enjoyment of the rest of the car. And freed from the distraction of the occasionally recalcitrant manual shift, you can focus on what the Evora does so beautifully. The sublime ride, the balletic balance, the perfectly weighted steering flowing with feel. The way the Evora covers ground remains a total joy.

The Evora IPS is clearly aimed at customers swapping from DSG-equipped TTs and the like – and for markets like the States that won’t even look at manuals. At £51,400 before options it’s slightly more expensive than the Porsche Cayman S PDK.

What really impressed me about this Evora was how much better finished, how much more ‘mainstream’ and less ‘cottage industry’ it felt than earlier examples. Encouraging stuff.