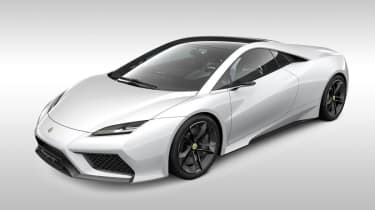 The news that Lotus is planning on creating a proper supercar is cause for celebration. Particularly when you get stuck into the finer points of the technical specification.

OK, it may weigh 1495kg, so is actually a fraction heavier than the 1485kg Ferrari 458 which is expected to be its closest (and most deadly) rival. Nor will it follow the Ferrari down the natural aspiration route. Instead it uses a supercharged 5.0-litre V8 (this will also underpin the Elite coupe cabrio and Eterne saloon) that will develop 542bhp as standard and 612bhp with the wick turned up for the R version.

Having said that, director of Product Engineeriing Paul Newsome told us that he thinks the biggest challenge of the entire model range will be getting the engine up to 620bhp without losing the drivability characteristics they want. The engine is already familiar - it's the Lexus V8 as seen in the IS-F and can rev to 8000rpm.

Even with 550bhp the two-seater, mid-engined Esprit is expected to hit 60mph from a standing start in 3.5sec (3.2sec for the R) and although top speed will be around 200mph, Lotus is aiming to keep CO2 emissions below 250g/km. As with the Elan, optional KERS and the seven speed double clutch gearbox will help here.

In the flesh at the Paris motor show it was a very convincing car - more than a hint of Lambo around the nose, but otherwise creative. Let's hope it makes it through to production largely unchanged. Expect it to cost £110,000, undercutting it's most obvious rivals considerably.