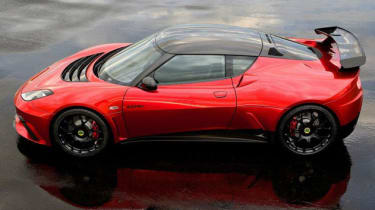 The first results of Lotus’s curious partnership with music producer Swizz Beatz have seen the light of day. The Evora GTE Swizz Beatz edition was revealed via a blaze of rapping by Swizz himself and fresh out of jail T.I. Swizz has had no influence of the mechanicals of the GTE, a hardcore road-racer version of the Evora, which launches in 2012. That means it gets a tuned up, 438bhp version of the Evora’s 3.5-litre V6 engine while weighing 105kg less than the standard car. It should be enough to endow it with a sub-4.5sec 0-60mph sprint and a top speed of around 180mph. This special edition (of a car that already was already limited) makes do with just a lick of paint, but an eye-searing one at that; Swizz has picked a red chrome finish to compliment the Evora GTE’s muscular, racecar-inspired bodykit. Click to see more Evora GTE pictures and see a video of the Swizz Beatz edition’s less than conventional unveil below…