Is the fastest, most expensive road-going Lotus to come out of Hethel enough to oust the mighty Porsche 911 GT3 from its lofty perch? 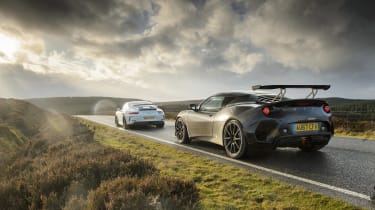 It’s a big ask, beating the 911 GT3, a car that’s been at the top of its game for nearly two decades, but if there’s a Lotus that can, it’s the Evora GT430. Like the 911, the Evora has been in a constant state of evolution, getting lighter and more powerful with each new version. The limited-edition GT430 offers the best power-to-weight ratio of any Evora so far and, frankly, we’d be gutted if it didn’t, because up close it looks like it’s made entirely from carbonfibre… and it comes with a price tag that suggests as much. But we’ll come back to that. Right now there’s some testing Welsh asphalt to tackle, and the first unexpected discovery to be made.

> Read our review of the latest Porsche 911 GT3 RS

The sun is out and the temperature is mercifully above freezing, but an ambient of 7deg C means that the Michelin Cups fitted to both cars are just below their operating range. Adding to the challenge, the surface is wet. With senses on high alert I set off in the Lotus and within a couple of corners I’m surprised at the level of traction and grip. The further I go, and the more of this undulating, twisting and difficult road that passes beneath the GT430’s wheels, the more impressed I am. Even working the growly V6 hard, I can’t seem to unstick the fat rear tyres.

It’s so good that I wonder if there’s very subtle electronic intervention going on behind the scenes, keeping everything under control. To test that theory, I go through the motions to turn off the traction control, which involves a combination of TC and Race mode button pushing. A few more miles and the Lotus remains as hooked up and on line as before. 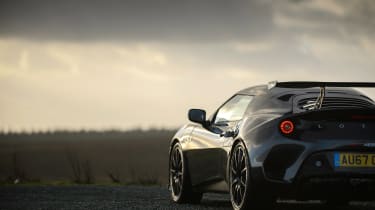 I wasn’t expecting that. Nor was I expecting the GT430 to ride as well as it does. It may look like a road-going race car but it clearly takes the ‘GT’ part of its name seriously. Either that or Lotus’s chassis engineers just can’t bring themselves to make a car that doesn’t breathe with the road. The GT430 glides over tricky surfaces all of a piece, yet the sporty tightness of control you’d hope for is there too in the lack of pitch and roll and the crispness of response. It’s a remarkable blend of skills.

The 911 should feel as hooked up as the Lotus in these conditions. It’s a modern mystery how its masses can feel so balanced when there’s a flat-six-shaped lump of metal hanging out the back, like a burly bloke on the other end of a see-saw. Logic says the engine is in the wrong place, except in conditions like these, when its leverage should help pin the GT3’s fat rear Michelins to the road.

After the Lotus, the first things that strike you are that the 911’s full bucket seats (optional) are more generously cut and that as soon as you’re rolling, there’s a chatter of feedback through the slimmer-rimmed but larger-diameter steering wheel. So you know what’s happening at the tread blocks of the front tyres, which is handy because the 911 has less traction than the mid-engined (albeit only just) Evora.

I didn’t see that coming, and the reason is unclear. The Porsche’s rear tyres are slightly fatter – 305/30 R20 versus 295/30 R20 – but they don’t have to cope with a chunk more torque; the GT3’s 4-litre flat-six delivers 339lb ft at 6000rpm, while the GT430’s supercharged 3.5-litre V6 churns out 325lb ft at a more accessible 4500rpm. A few more miles confirm that the 911 has less rear grip, but because it has a front end that lets you know what’s going on, it isn’t an issue; you feel informed, engaged in the process, confident that you know what’s going to happen.

Parked beside each other, these two hardcore drivers’ cars look quite different, both in proportions and theme. In all white, with its centre-lock wheels and visible half cage, the 911 looks like it could be one of a batch of identical homologation cars awaiting a set of slicks, sponsor’s livery and the first shake-down test of the season. On the other hand, with its swathes of exposed carbonfibre and mid-engined proportions, the Evora looks like a miniature supercar embodying recent GT race car aerodynamic thinking. Its nose is made up of multiple sculpted components, there are wing-top slats for venting the front wheel wells and ducts for the rears, plus a high-mounted rear wing. While the standard Evora profile gives it a push-me-pull-me look, the GT430’s aero addenda, deleted rear side glass and bigger rear wheels and tyres give it a dart-like profile.

This dark, stealthy example is number one of a limited edition of 60, all of them sold despite a list price before options of £112,500. That makes it the most expensive Lotus ever, and it claims a number of other Lotus records too, including most powerful production model (430bhp) and fastest top speed (196mph). Impressive stuff, though there are a couple of caveats. In 2012 Lotus made the even more limited edition Evora GTE  (just 25 made) to homologate its GTE-class racer, and that had a claimed 438bhp. Meanwhile, the fastest top speed goes to the ‘Sport’ version of the GT430, which makes do without the bold rear wing and has less drag. The bewinged car goes to ‘just’ 190mph, but the extra downforce it creates – 250kg at max speed compared with 100kg for the Sport – helps lop a second off its Hethel lap time and means that the GT430 matches the 1min 25.8sec set by the stripped-back 3-Eleven. 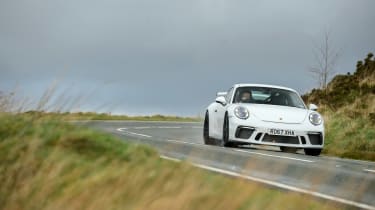 The Sport is the lighter of the two versions, too, by 10kg, but if you’re spending over £100k on an Evora you might as well go the whole hog. This example has optional metallic grey paint that from a distance disguises just how much carbonfibre there is on show. The front and rear bumper aprons are carbon but mostly painted, but the front ‘bonnet’, the roof and the engine cover are all in lacquered carbonfibre, and it’s beautifully done, particularly the roof with its centre-line join giving a herringbone effect.

Some of these panels were first seen on the previous lightest Evora, the Sport 410. The big contributors that make the GT430 26kg lighter still are an even greater use of carbonfibre (-4.7kg), a titanium exhaust (-10kg), new adjustable Eibach/Öhlins spring/damper units (-10kg), and a number of detail savings (-10.3kg). Offsetting that 35kg by 9kg is the new rear wing plus wider wheels and tyres.

Mind, whichever way you cut it, a 1299kg kerb weight for a car of this scale and performance is a fine achievement and true to the Lotus philosophy. Porsche might not use such obviously lightweight materials for the GT3 but its body is a clever fusion of high-tensile steel and aluminium and, like the Lotus, its rear seats are deleted. The GT3 is no heavyweight but at 1413kg, it gives away 114kg to the GT430.

There’s no impression that the Lotus has been stripped out, either. The interior has come a long way since the Evora’s 2009 launch. It’s now a neat confection of Alcantara and perforated and smooth leather with contrasting stitching, and the instruments are much more convincing than the originals, with clear white-on-black faces and red needles. The Sparco seats do look small and minimalist though, their carbon shells trimmed with just enough padding and material to offer comfort and durability. The fixed backrest angle is a fraction too upright for me and it seems it can’t be adjusted beyond sliding it fore and aft, even if you’re handy with an Allen key. The driving position is all pretty square, the aluminium pedals decently spaced, the clutch light.

Fire the engine up and it gives a characteristic V6 growl before settling to a steady idle. Snick the lever into first and you sense the improvements to the gearshift: the action is tighter, firmer, more positive. The gearing still seems quite tall, though, with second gear stretching to 70mph and therefore more than enough for the cut and thrust of B-roads. Even so, there’s a real and very appealing sense of a lightweight car propelled by a torque-rich engine. The response of the Toyota-derived V6 is enhanced by a low-inertia, single-mass flywheel, and even the roll-on in fourth is impressive, the engine digging in from 2000rpm and trumpeting its enthusiasm through the central pipe.

It’s pretty vocal, though not as painfully loud as the example Adam Towler tried in evo 243, probably because among the options fitted to this car is the sound insulation pack. It costs £500 and when added to the others – metallic paint (£1200), ‘premium’ infotainment head unit, sub-woofer and amp (£2400), air con (£1500), black machined-rim forged wheels (£900) – brings the total to £119k, and presumably adds a few kilos, too.