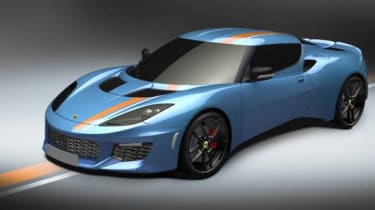 Lotus fans from around the world have helped choose a new colour scheme for the next Evora 400 special edition via the firm's Facebook and Twitter feeds.

Lotus fans from around the world clearly aren’t the most imaginative bunch either, as the ‘Blue and Orange’ edition Evora features clear visual links to the Gulf colour scheme.

The livery was chosen over several other familiar colour schemes, including various original Lotus schemes, including a JPS-style black and gold, green with a red stripe, and the green and yellow similar to the firm’s early Grand Prix cars.

Best-known for its appearances on the Ford GT40 and Porsche 917, the colours have featured on dozens of race cars since, and any trip to the Le Mans 24 Hours will yield at least one sighting of a car dressed up in the iconic livery as a tenuous tribute. 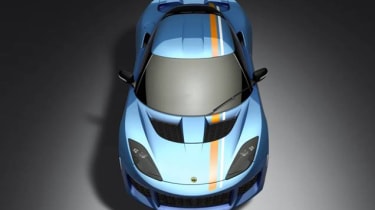 But no official Lotus race car has worn the colours, so the Blue and Orange Evora 400 is instead a gentle homage to the livery, featuring metallic blue paintwork with offset orange and white stripes down its length – a combination selected over the more traditional Gulf thick orange stripe on light blue paintwork.

Inside, the theme is replicated with orange contrast stitching for the black leather seats and cabin trim.

Mechanically, the Blue and Orange is unchanged – power still comes from a 3.5-litre supercharged V6 developing 400bhp and 302lb ft, firing it to 60mph in 4.1sec and 186mph at the top end.

According to Lotus CEO Jean-Marc Gales, the company will produce just ten Evora 400s with the Blue and Orange livery, though the company points out that the Lotus Exclusive program does allow buyers to pick and choose numerous design options.

In effect, the new special is an advertisement for the Exclusive program’s reach. ‘Owning a Lotus is a statement that you value design, innovation and the skills of our craftsmen and women who hand build all Lotus sports cars in Hethel,’ explains Gales.