Lotus sets its crosshairs on the Porsche 911 with its new Elan sports car. Ollie Marriage reports. 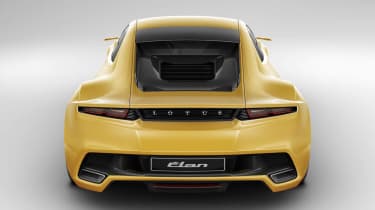 The Elan has been through a few incarnations since the first one appeared back in 1962 as a front engined, rear wheel-drive roadster. A brief foray into front wheel-drive for Lotus brought back the Elan badge in 1989, but by the time the third generation goes on sale in 2013, the name will be over 50 years old.

Together with the Esprit, the Elan will be the first of the new Lotus' to go on sale and its timing and positioning is deliberate. It's designed to go head to head with the Porsche 911 - arguably the toughest task that any of Lotus' five new sports cars faces.

To give it the necessary firepower, the Elan will use a supercharged 4.0-litre V6 expected to develop around 395bhp in normal trim. As with all other new models from the Elise to Elite, an R version will be available with more power - upwards of 460bhp in the case of the Elan.

Half a metre longer than the Elise, the Elan will be a two-seater, but will have an optional 2+2 arrangement and is expected to be offered in convertible trim as well. This is true for both the Elise and Esprit and we understand this is down to the inherent stiffness of the bonded aluminium chassis - it's strong enough that it doesn't necessarily need the added strength offered by a hard top.

The aim here, according to Lotus, is everyday usability and versatility with good refinement, but a weight of no more than 1300kg despite the fact it uses a seven-speed double clutch gearbox and optional KERS system, providing a further power boost.

As a result the engine is expected to deliver less than 200g/km of CO2, whilst propelling the Elan to 60mph in under 4sec (3.5 in the case of the R). Of all the cars Lotus is developing, it's this one that has the toughest task, in tackling the Porsche 911.  The design is good. Let's hope the execution matches up.