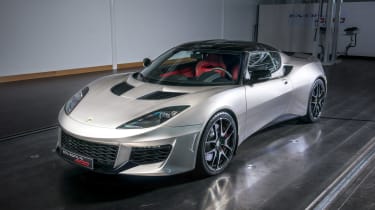 Lotus and motor shows have form. In 2010 former chief executive and ex-Ferrari man Dany Bahar rocked up to the Paris motor show with five potential new models, a bunch of Z-list celebrities and a plan for world domination.

Of course, Dany’s plans didn’t quite pan out the way he wanted them to. Now Lotus is under the stewardship of former Peugeot-Citroën exec Jean-Marc Gales and is officially on the road to recovery. To mark the achievement, the company is launching its first new significant model since 2008, when the original Evora was first revealed.

The new car, called Evora 400, isn’t a clean-sheet design but there isn’t an area Lotus hasn’t looked to improve upon. The outgoing car’s doors, roof and front and rear shells are carried over, but the front and rear bumpers are new, as is the bonnet while the engine cover has been improved upon, too.

Russell Carr, who designed the original Evora, says the 400 follows Lotus’s design philosophy of supercar performance, and supercar design. ‘We wanted to give the Evora 400 more aggression and presence. And with the increase in performance we had to be aware of the aerodynamic needs, too.’

Lotus has now confirmed pricing for the Evora 400. Billed as the fastest and most powerful production Lotus ever, it's also one of the most expensive, with a starting price of £72,000 in the UK.

That's actually a little less than the £76,000 we estimated when the car made its motor show debut earlier in the year, but puts the car well and truly among its toughest competitors from Porsche.

However, the car does have high levels of specification. As standard, Evora 400s include 370mm composite two-piece AP Racing brakes, a limited-slip differential, automatic air conditioning, and a full infotainment system, including satellite navigation.

There's a host of options too, from an automatic transmission (£2000 extra), to Alcantara or leather trim for £2500 and metallic paint at £900. An optional Black Pack, for £1250, selectively colours various elements of the car in gloss black. £300 gets you yellow- or black-painted brake calipers. More useful for those who take their Lotus on track is the lightweight, forged alloy wheel option for £2000. 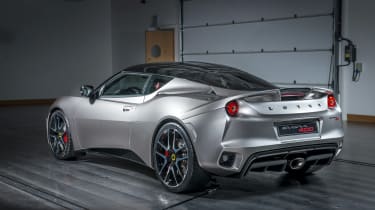 Lotus has revealed details of the new Evora 400's performance. The new car managed a 1 min 32sec lap time around Hethel, the  Lotus test track. This puts the Evora 400 six seconds quicker than the Evora S. Tests were carried out by Gavan Kershaw, with the car running on standard tyres and suspension.

The Evora 400 uses the same 3.5-litre supercharged V6 found in the Evora S. It puts out 394bhp and 302lb ft of torque, which translates to a 0-60mph time of 4.1 seconds and a 186mph top speed. The power 55bhp power increase over an Evora S comes from changes made to the exhaust, induction, supercharger and ECU. New spring rates and wheels have also been added.

Continue to page 2 for performance details and our video from the Geneva Motor Show.