Created as a 40th anniversary tribute to the Esprit S1 used in Bond flick, the Sport 410 offers a unique design 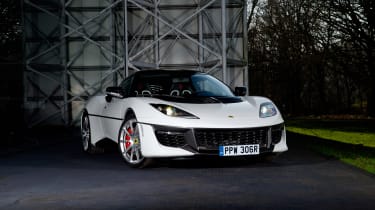 For petrolheads, it’s one of the most iconic moments in film. As Bond’s white Lotus Esprit S1 barrels along the road being pursued by a helicopter, Roger Moore turns to his companion and asks – “Can you swim?” The car then leaps off a pier and into the water, revealing that it’s actually a submarine.

Of course, part of the appeal was always the car itself, with its classic 80s wedge shape and white colour scheme – and now Lotus has created a one-off special edition honouring this. It’s been created for the 40th anniversary of the film – The Spy Who Loved Me.

It’s a version of the Lotus Evora Sport 410, named for its 410bhp power output, and it’s mechanically identical to the standard car. That means it uses a 3.5-litre V6 engine, with a supercharger attached to give a top speed of 190mph and 0-62mph in just 4 seconds. Instead of mechanical tweaks, though, Lotus has given the car some serious retro design flair. 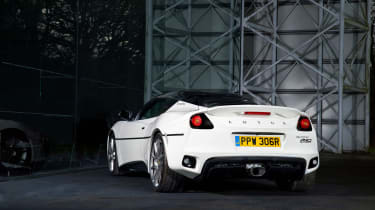 Lotus Exclusive, the company’s in-house bespoke department has painted the car in white and added black bumpers to hark back to the Esprit’s classic look. The carbon fibre tailgate has been painted white, too, while the car has a black coachline around its waist.

The ‘Evora’ logo has been given a makeover too, and is painted onto the B-pillar in the same script that the Esprit used.

Inside, the car is equally retro thanks to tartan seats and door cards, plus contrasting stitching on the Alcantara-coated dash and centre console.

Lotus is keen to point out that the personalisation won’t harm the Evora’s amazing handling, and is using it as a showcase for some of the options available through the firm’s Exclusive service. This particular car is a one-off, but the standard model is hardly common – the Evora Sport 410 is limited to just 150 units per year, and costs from £82,000.