More intense and more exciting than an Evora S, a step up 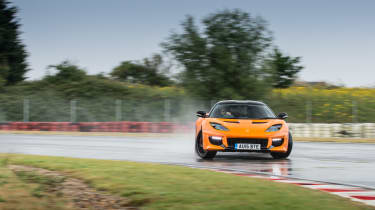 The Evora benefits from more power, a cut in weight, a sharp new look and a chassis with greater focus and agility. It’s also more expensive than a Cayman GT4… Better be good, then.

A welcome distraction from all the rumour and conjecture that seems to swirl around Lotus, that’s for sure. This is the Evora 400 – so called because thanks to a new charge cooler and increased supercharger pressure the 3.5-litre V6 now produces 400bhp at 7000rpm and 302lb ft from 3500-6500rpm. It also benefits from an aggressive redesign, enhanced interior and a chassis tuned for greater agility, grip and traction. The Evora 400 costs £72,000.

Although the Evora 400 looks like a light refresh over the Evora S there’s a vast amount of detail change. The headlines are that 55bhp hike in power, a weight reduction of 42kg down to 1395kg and the new shape’s improved aerodynamics. At 150mph the Evora 400 produces a modest 32kg of downforce. It’s the most powerful production Lotus ever and with a top speed of 186mph and 0-60mph covered in 4.1-seconds it’s the fastest, too.

Delve beneath the skin and you’ll find retuned Bilstein dampers, much stiffer springs at the rear, bigger discs for the AP Racing braking system, more sophisticated stability control with four modes – Drive, Sport, Race and Off – as well as a bombastic 3-inch exhaust system, a much improved gear shift and, finally, a standard fit Quaife torsen limited slip differential. 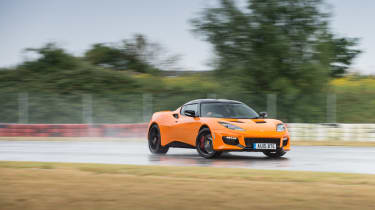 Perhaps even more significant is the revised aluminium chassis itself. The huge sills that used to make getting in and out of the Evora such a chore have been cut away – they’re 43mm narrower and 56mm lower. Don’t worry about trying to visualise that, the reality is that you can hop into the Evora without even thinking about it. It is a vast improvement and immediately makes the car a much better ownership proposition.

So you’ve slid (almost) effortlessly into the lighter new Sparco seat. The driving position feels a touch high but the new interior is so much nicer to look at and touch. Quality has taken a significant step. However, this ain’t no Cayman and the Alpine infotainment is pretty nasty. So it feels low volume but just about good enough not to constantly grate.

The engine starts with a deep howl. Blimey, it’s so much more exciting than the Evora S just sitting still. The gearbox has been a huge focus in the 400’s development programme and feels much tighter and more precise. It lacks the smooth fluidity of a Cayman’s ‘box but then so does pretty much everything on the planet. Later, the odd graunch and missed shift will highlight it’s still a weak link and hurrying a shift across the gate is almost impossible.

But if the gearbox disappoints the rest is mostly very good indeed. It feels really fast and sounds terrifically angry, popping and crackling in Sport and Race modes. The ride retains much of the Evora S suppleness and what’s been sacrificed in comfort is made up for with improved control. There’s less body roll, a greater sense of connection with the road and faster response to steering inputs. 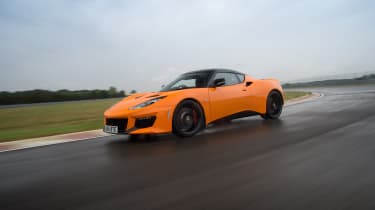 The steering itself is simply beautiful. There’s a bit more grit and weight than previously but its still alive with subtle detail and it allows you to quickly gain confidence with the 400. On streaming wet roads around the factory the 400 feels poised, alert and sweetly balanced. There’s also much improved traction thanks to new Michelin Pilot Super Sport tyres and, crucially, that limited-slip differential. In fact the way it drives out of tight corners is remarkable. The traction control is fantastic too, especially in Race mode where you can provoke a bit of oversteer and even ride it out with help from the electronics.

On the track all remains controlled and balanced. The new brakes aren’t up to carbon-ceramic standards and can go a little long, there’s a bit more body roll than you might expect (considerably more than a GT4, for example) and that manual ‘box still gets flustered from time to time, but in the main the 400 feels fast and exciting with a well-judged compromise between sharp response and a creamy transition into slip. It’s seven seconds a lap quicker around Hethel than the Evora S and I’m sure it’d be a hoot to use on trackdays in general. There’s just a more intense flavour to the whole experience than with Evora S.

This is where it gets tricky for the Evora 400 because there’s no escaping the fact that the Cayman GT4 offers so much goodness for a lot less money. The Porsche isn’t quite so fast but it does have a better drivetrain and in terms of quality it’s obviously on another level. However, there are plenty of people who don’t want (or can’t get) a Cayman and the superbly communicative, agile and now more exciting Evora 400 has its own appeal. The fact that you can now actually get into the thing without folding yourself up like origami makes it vastly more appealing.

Should you find the exhaust note a bit too anti-social or too much to meet militant noise limits at your favourite track you can close the bypass valves to calm down the decibels. Oh, and there’s an automatic option with much improved shift speed (from 240-milliseconds in Evora S down to 100-milliseconds) but that does without the limited-slip differential.