Previous evo Car of the Year, the Lotus Evora, gets a refresh and quality upgrade for 2012. We drive the supercharged Evora S 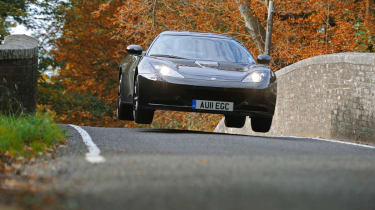 The Lotus Evora S in updated 2012 model year trim. The British sports car company is keen to address criticisms of the model’s trim quality while setting the stall for its upcoming, upmarket range of new sports and supercars. The supercharged Evora S 2+2 you see here costs £64,190.

The 3.5-litre V6 has never sounded or felt quite as feisty as its outputs – 276bhp in the regular model, 345bhp in the supercharged ‘S’ – suggest, so a number of tweaks have been made to bring some much-needed zest to its performance.

First, there are new engine mounts, which control the motor’s mass better at low speed and thus allow a more aggressive throttle map.

Second is a revised flywheel and clutch pack that allow it to rev faster. Material has been machined from the flywheel almost halving its inertia, and a lighter clutch-plate mates to it, so the engine revs rise and fall more quickly. Both of these changes benefit the gearshift, and significantly there are now higher-quality cables offering less friction, lowering the shift loads.

Lotus has also discovered the exhaust valve. Turn the key and the Evora S – handsome in optional Starlight Black with gloss black wheels – fires with a flourish before settling to a loping, quiet V6 whirr. The valve comes with a new silencer and opens up at 4700rpm, or from 1500rpm in Sport mode.

The first 1000 metres are a bit special. By the time you’ve covered this distance from the Hethel factory gates you are once again reminded of the exceptionally supple, connected relationship the Evora’s chassis has with the road, even the occasionally tumultuous surfaces hereabouts. But that’s now joined by a more precise edge from the drivetrain; the gearlever slices around the revised, closer gate with a weight and directness, and enjoyable tactility, that’s a significant improvement over the previous set-up.

On top of this, the supercharged V6 is much sharper and more positive from low revs. It’s as if a great mass has been lifted from it and the sound of it being exercised is now more engaging and characterful. In Sport it is louder than before but it now has a convincing voice from low down, and the richness of the note and natural way it builds up to the red line make the performance seem more freely given.

The chassis remains the single most impressive aspect of the car. Many of the formerly unique ‘S’ chassis parts have been rolled onto the non-supercharged model as they make the car keener, don’t impact on refinement and simplify production. With P Zero Corsas and the 19in front/20in rear wheel option, there’s more grip than you need but it’s a beautifully poised car. Tweaks to the set-up have been wrought for greater straight-line tracking stability and improved steering effort build-up in cornering, and they deliver.

The Evora’s strengths have undoubtedly been added to, but it’s still hard to forget about the not significantly more expensive Porsche 911. In all-new 991 iteration you’ll pay £71K for a 345bhp Carrera, which will be more practical than the Evora. Equivalent outgoing 997 cars, including the brilliant Carrera GTS, will now be attainable for prices very close to the Evora S’s price tag.

The standard Evora costs £53K and gets a 276bhp/258lb ft naturally aspirated version of the 3.5-litre V6. While it’s a second slower to 60mph and its top speed is 10mph worse off, it also offers a chunky saving and was evo’s 2009 Car of the Year.

Full gallery of all the new Lotus sports cars