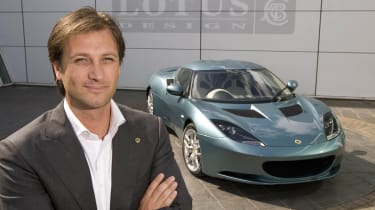 Lotus has moved to calm speculation that the crisis-hit British sportscar maker is in danger of being put into administration by releasing a statement - written in conjunction with CEO Dany Bahar - on the situation at Hethel.

‘The new Proton owners DRB-HICOM are currently in the middle of their due diligence of Group Lotus. There have been and continue to be positive discussions between Group Lotus senior management and senior management at DRB-HICOM both here in Hethel and in Malaysia. Despite various rumours in the media to the contrary, at no point has DRB-HICOM indicated to Group Lotus that they intend to put the company into administration and we welcome the opportunity to put that rumour along with incorrect speculation that production has stopped, that Dany Bahar is no longer CEO and that we are no longer involved in F1 to bed.’

evo understands that rather than being ‘on leave’, Bahar is currently travelling in the Middle East on business, and will be returing to Hethel next week before attending the Beijing Motor Show.

In an second and - ahem - punchier statement, Lotus added:

'The takeover of our parent company Proton by DRB-HICOM couldn’t have come at a worse time, but up until that point Proton was (and still remains) fully committed to our five year business plan to create jobs and to expand the factory and business. With the takeover process the funding has been restricted and DRB-HICOM is taking time to understand what to do with the business.

'DRB-HICOM is currently in the middle of due diligence of Group Lotus and there have been and continue to be positive discussions between Group Lotus senior management and senior management at DRB-HICOM both here in Hethel and in Malaysia. At no point has DRB-HICOM indicated to Group Lotus that it intends to put the company into administration. The over-active rumour mill is seriously damaging our business reputation, image and credibility but it is what it is.

'The simple fact is, and we haven’t denied this - Lotus is going through a very difficult phase at the moment but we are showing true fighting spirit every day in trying to keep this vision alive. This is also a fact – no matter what people outside of Lotus may say or tweet or blog.'

We'll bring you more news as soon as we get it.