New 345bhp supercharged version of evo's 2009 Car of the Year, the Lotus Evora 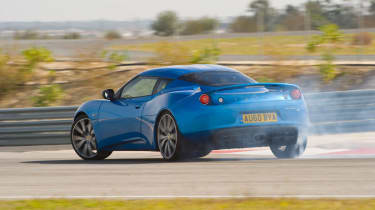 The addition of a supercharger has a profound effect on the Evora. It lifts the output of the 3.5-litre V6 from a slightly lazy 276bhp to a much more alert and interesting 345bhp. At the same time, it moves the upwardly mobile and ferociously ambitious Lotus into core Porsche territory, standing the Evora toe-to-toe with the entry-level 911. On power, weight and price, there’s not much in it, and Lotus’s chassis experts have been hard at work, refining the Evora’s sublime dynamics to exploit the extra punch.

If the supercharger wasn’t on show in the back window you might never guess that this Evora has forced induction. There’s none of the rasping whine that characterises the supercharged Exige, and the instantaneous throttle response and linearity of the power delivery give the impression that there is simply a bigger engine in the back. The ’charger is an Eaton TVS (twin vortex series), its installation engineered in conjunction with Australian firm Harrop, and as well as lifting power to 345bhp at 7000rpm it also bumps up torque by around 35lb ft right across the rev-range, peaking at 295lb ft at 4500rpm. It’s cooled by a pair of oil/water radiators mounted in the nose – along with the associated pipes and fittings, plus the mass of the ’charger itself, the installation adds a significant 50kg to the kerb weight.

This may now be a 1430kg Lotus – no flyweight – but its chassis is reportedly remarkably sensitive to changes. Most of the work has focused on the suspension bushes, which have been re-rated to reduce camber compliance and increase lateral stiffness – in short, there’s less give in cornering and less geometry change, too. The spring rates remain the same, the damping has been tuned to suit the new suspension characteristics and there has been work on steering feel to give more consistent weight on centre and on lock. A new option is larger, diamond-turned wheels (up from 18/19in front/rear to 19/20in) fitted with the latest generation Pirelli P Zero Corsa tyres with a more conventional tread pattern, making them less noisy and grippier in the wet. Our test car had these fitted, while standard kit includes the close-ratio gearbox (a must-have on the stock Evora) and the rear diffuser.  Almost from the moment the wheels start rolling, the S feels quite different to the regular model, the steering having more weight and the ride being a fraction firmer. There’s a bit more of a boom from the V6 on start-up, though that’s probably because this car has the optional sports exhaust, too (the stock system is valved to manage back-pressure across the rev-range). It’s still not an evocative-sounding engine when you’re loafing around, its voice merely a collection of whirrs and zizzes; it’s much better from the outside, or with the windows down. There’s no question the power is all there when you put your foot down, though, the V6 snapping the Evora forward with welcome vigour, and sustaining the push all the way to 7200rpm if you’ve pressed the ‘sport’ button.

It’s a good solid push, especially noticeable at low revs and exiting bends, when it gives the rear tyres a tougher workout. As mentioned, although the changes to the chassis appear mere details, the S has a quite different feel. The standard car had an Elise-like delicacy, a lightness, a deftness, that made it effortless over difficult roads. The new set-up suits the output of the S, bringing more direct and less easily deflected steering and more positivity and control in the corners at the small expense of a firmer, slightly noisier ride.

DPM (Dynamic Performance Management), Lotus’s stability control, is standard on the S and works well, subtly keeping excesses in check. A looser leash when the ‘sport’ button is pressed allows you to feel what the car does if you push to the limits. Answer: despite the mass of that tall V6 and the extra torque, the Evora S behaves exceptionally well. There’s oodles of feedback and the limit is a soft edge rather than a cliff edge.

With DPM off, the nose runs a little wide at first, but keep the throttle on and the torque will tip the balance rearwards towards the end of the corner until the rear is slipping slightly. You now have options that weren’t open to you in the stock Evora, and although the weight can carry the rear if you back off sharply into a turn, it won’t keep going, the chassis feeling flat and poised and recovering to neutral as the speed scrubs away.

On track it’s superb, power-sliding despite the lack of a limited-slip diff and showing that same composure through high-speed corners. The gearshift is a little disappointing under pressure but the many small changes, which will also filter down to the stock Evora, make it more direct in general use.

It’s a different sort of Evora, the S, a more direct, more focused and much faster one. Better than a base 911? Different. Not as rich in character or as polished as the Porsche, particularly when ambling, but a compelling alternative. Bodes well for the future…