Softer set-up results in the most useable modern Evora, but doesn’t sacrifice its handling abilities 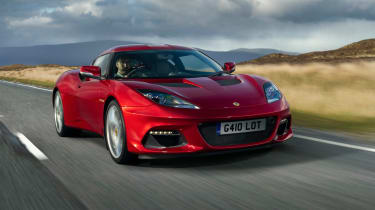 It’s rare that we’ve had cause to complain about the ride comfort of a Lotus, but with models like the Evora targeting a wider audience than the Elise or Exige, a little extra comfort wouldn’t go amiss for some customers.

In order to fill that niche, Lotus has now created the Evora GT410 as an alternative to the more focused GT410 Sport. Think of it as a more everyday-suitable Evora (not unlike the earlier cars), with extra sound insulation material and a softer ride to broaden the car’s appeal.

That’s important, as the Evora is well within Porsche 911 territory these days in terms of both price and performance, so it needs to offer more than just the usual Lotus dynamic talents to justify its existence.

The GT410’s powertrain is unchanged from the GT410 Sport, which means the latest development of the Toyota-sourced, supercharged 3.5-litre V6 developing 410bhp and 295lb ft of torque. A six-speed manual transmission is standard, with a six-speed, paddleshifted automatic optional, though only the manual gets a Torsen limited-slip differential.

Accelerative performance is identical whichever transmission is equipped, both reaching 60mph from rest in 4.1 seconds (with 0-62mph in 4.2sec), but the manual has the higher top speed at 186mph, to the auto’s 174mph. 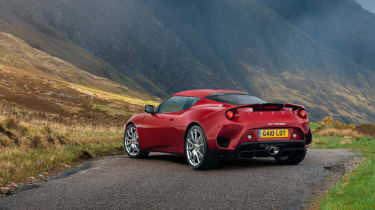 There’s a valved exhaust system just like that of the 410 Sport, which keeps the volume of that V6 down in most driving conditions but raises its voice when you’re working it. A button lets you open the valves throughout the rev range and Lotus tells us it’s possible to have them permanently closed if your local trackday has particularly harsh noise regulations, but the engine breathes better with them open.

The louder option certainly accentuates the Evora’s sense of speed, and with the valves permanently open, throttle response does seem sharper. With AP Racing brakes all round, the GT410 also has the stopping power to match its rowdy powertrain.

What separates GT410 from GT410 Sport are comfort features. Lotus has moved a few items from the options list onto the GT410’s standard equipment, air conditioning being a particularly relevant inclusion, as well as an infotainment system with Apple CarPlay. The doors gain arm rests – don’t laugh, that’s a big deal in a Lotus – while you also get cruise control, heated Sparco sport seats, and even a reversing camera.

There’s more sound insulation too, but perhaps the most significant concessions to everyday usability are softer suspension (apparently inspired by the standard settings offered on American-market Evoras) and Michelin Pilot Sport 4 S tyres rather than the Sport’s Cup 2s – though tick the Sport option box and that car’s sports suspension, forged wheels and sticky tyres return.

Otherwise, the GT410 is standard Evora fare: a bonded aluminium chassis, a composite body, hydraulically rather than electrically assisted steering, and a 2+2 seating layout with rear seats that push the +2 definition to its absolute limit.

By pure coincidence, there was a Porsche 992 Carrera in for test at evo Towers during our few days with the Evora, and while the Porsche was better than the Lotus in all the areas you’d expect – quality, usability, outright performance – the levels of driver interaction offered by the Lotus were a stark reminder of how far the class standard has drifted away from the kind of involving, tactile experience at which Lotus still excels.

Just sitting at the Evora’s controls is interesting enough. With a low scuttle and relatively high seating position it feels not unlike an old NSX, with fantastic forward visibility and a sense you can reach out and steer the front wheels directly. And given the clarity and feedback of the GT410’s steering, you might as well be.

The system is almost perfectly judged for a modern car, balancing manageable weight with measured responses. Like every Lotus since the original Elise, the steering wheel constantly sends subtle movements back to your palms, but it’s conversation rather than noise.

You quickly build trust with the car as a result, and while greasy roads during our test meant front-end grip was lower than it might be in more clement conditions, it takes just a few corners to learn how hard you can push. 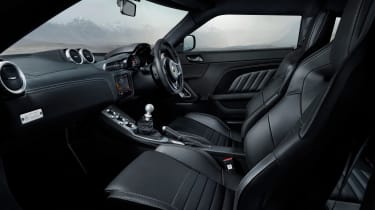 The extra pliancy of the ride also means very few sports cars at any price point can match the GT410’s ability to absorb the UK’s crumbliest sections of B-road. The only cars that get close are Alpine’s A110, and certain members of the McLaren range – and Lotus does it with better body control than the former, and less complexity than the latter.

The supercharged engine feels as strong as ever, and with most of the car’s weight behind you, it’s actually not unlike a 911 to drive in some situations, pivoting around the nose and generating good traction out of turns.

The V6’s linear delivery is another confidence-builder, and a huge part of the car’s character – not just through your interactions with the throttle and the mechanical clack of the six-speed manual, but also the bellowing noise generated as the exhaust valves open.

Like other Evoras, there are a few idiosyncrasies that either add character or breed frustration. Despite snappy throttle response when you’re accelerating, it’s surprisingly tardy to respond when you’re calling for a downchange blip, making heel-and-toe a hit-and-miss affair. The monotone howl of the exhaust can get tiring after a while too – there’s not the sonic character here of a multitonal Porsche flat six – and while the GT410 brings back a rear window, rearward visibility is still fairly hopeless. Ditto the rear seats, which are practical for small luggage perhaps, but barely worth the compromises they require of packaging and styling.

There is another black mark against the GT410, and it’s price. At £82,900, it’s exactly £107 more expensive than a bone-stock Porsche 992 Carrera, and while the Lotus unequivocally offers a more engaging driving experience than the Porsche, it’s several significant steps behind in terms of everyday usability, quality and practicality.

If you have your heart set on the most involving drive available in this class though, there’s still very little else to match the now decade-old Evora platform – and that’s something Lotus should be proud of.