Lotus has announced a one-off 'Freddie Mercury' edition of the Evora S to be auctioned for charity. 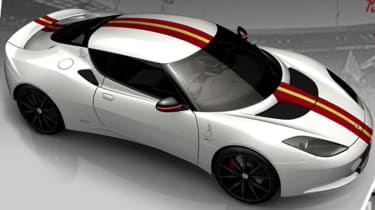 More bizarre news from Lotus – and we promise we’re not making this up – is the announcement of the Evora S Freddie Mercury Edition.

This is one where we’re not going to be able to improve on the press release, which in between excrutiating puns on various Queen song titles, promises a ‘white, red and gold colour scheme inspired by the iconic costume Freddie work for the 1986 “Magic Tour”… the front fender references the Montreux Freddie Memorial statue with the line “Lover of life. Singer of songs,” taken from the statue’s inscription.’

Inside, there’s a ‘one-off yellow interior, also inspired by Freddie’s 1986 stage costume, including a union flag on the back of the seats and the incorporation of a crown to hint at Freddie’s playful royal role-play.’

Perhaps unconsiously referencing the wave of rock-themed Golf limited editions that VW created to appeal to music-loving Germans in the 1990s - that brought us Bon Jovi, Genesis and Rolling Stones themed hatchbacks, the Evora S Freddie Mercury is a one-off, built to be auctioned on September 5th – which would have been Mercury’s 65th birthday – with proceeds going to the Mercury Phoenix Trust.

But it’s fair to say that the announcement is likely to stir up some heated debate among the Lotus faithful, many of who are still recovering from the news that ‘rapper and producer’ Swizz Beatz has joined the sportscar maker as vice president of creative design and global marketing.

Or, as the press release puts it, ‘Another One Bites The Dust.’