Some seven years after the launch of its executive saloon, Maserati has given it a V8 – with 572bhp 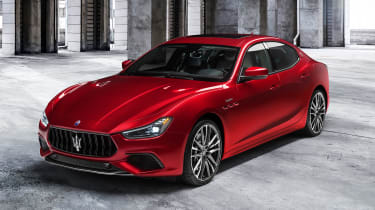 We could be forgiven for thinking the Maserati Ghibli Trofeo would never happen. Years of uncertainty, inconsistency and a fundamental mismanagement within Maserati have been the hallmarks of an Italian brand that deserves more. Its time may have finally come. In the coming weeks we’ll see the flagship MC20 supercar, but for now Maserati is kicking off its renaissance by pairing its mid-sized Ghibli saloon to a Ferrari-built 572bhp V8 engine, in so creating the Ghibli Trofeo.

The Ghibli has undergone a variety of changes under the skin since its introduction in 2013, but none have really captured the essence of what the Ghibli could be. Until now it has been saddled with either a raspy but otherwise gutless V6 petrol or (lord above) a Jeep-sourced V6 diesel, but the Trofeo’s V8 is a twin-turbocharged unit built by Ferrari and shared, albeit in a different final specification, with the Portofino and the recently launched Roma. 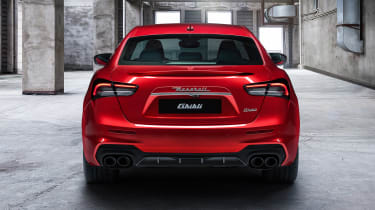 The engine has a 90-degree V and shares much of its specification with current Levante Trofeo unit, but features new mapping and calibration software, and fresh hardware including new pistons and connecting rods. The heads have also been redeveloped with new camshafts and valves, and even the two turbochargers are new, each being driven by a specific cylinder bank and fed by its own intercooler. Despite this work to the powertrain, peak power is the same as for the Levante Trofeo revealed nearly two years ago, with 572bhp reached at 6750rpm, and peak torque of 539lb ft available between 2250rpm and 5250rpm. This updated V8 will also find its way into the Quattroporte and Levante Trofeos.

In the Ghibli, power is sent to the rear wheels only through an eight-speed ZF automatic transmission and an old-fashioned mechanical limited-slip differential. This rear-drive-only configuration will be a contributing factor in the car’s 0-62mph time of 4.3sec – compare this with the similarly powerful but four-wheel-drive BMW M5, which takes just 3.4sec for the same benchmark – but as a reminder of exactly how potent the Trofeo’s V8 is, its top speed is quoted as an incredible 202mph. The kerb weight is specified at a staunch 1969kg, so it’s certainly no lightweight, but the Trofeo’s standard-fit Skyhook adaptive dampers and double-wishbone front suspension have both been recalibrated to try to keep this 572bhp rear-wheel-drive supersaloon under control. 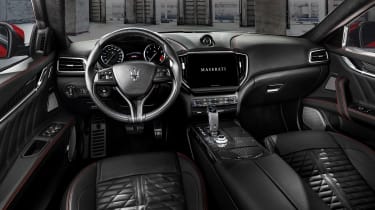 Inside, the Trofeo picks up the same technical updates as the recently revealed Ghibli Hybrid, a model that’s firmly at the other end of the performance spectrum. These updates centre around a new infotainment system – the third system fitted since the Ghibli’s introduction in 2013 – which complement the plush standard interior leather finishes.

It’s the exterior changes that are most damning here though, or rather the lack of them. The new car looks almost identical to GranSport trim level versions of lesser Ghibli models, aside from the occasional Trofeo logo or the subtle red detailing in the badging and trademark triple vents. This lack of significant differentiation is in stark contrast to the Mercedes-AMG E63 S and BMW M5 Competition, rivals which both scream about their performance agendas almost as loudly as full-bore supercars. 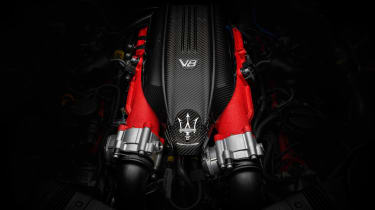 The larger Maserati Quattroporte will also pick up the Trofeo’s updated V8, a lesser 542bhp version of which was previously available in the GTS. Like the Ghibli, the Quattroporte gets some understated design tweaks, a subtly retuned chassis set-up and some interior updates. The Quattroporte, however, gets an electronically controlled limited-slip differential, in contrast to the Ghibli’s completely mechanical unit.

Maserati’s approach to the supersaloon template might seem a little behind the curve compared to German rivals, but like the Lexus GS-F that broke onto the scene with a big power deficit and underwhelming figures in 2015, the Ghibli has something else on its side: variety. The Ghibli is now the only (full-time) rear-wheel-drive supersaloon at this level, and one that packs a Ferrari-developed V8 under the bonnet. It’s paired with an aesthetic so underwhelming it could almost belong to a Milanese minicab, and while it’s unlikely to challenge an M5 Competition around a racetrack, or appeal to as many buyers as the more ostentatious AMG E63 S, the Ghibli Trofeo is certainly a fresh breath of air in the supersaloon class. 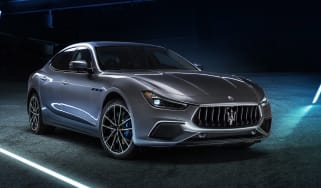