Maserati's Quattroporte Sport GTS is the sharpest – and most vocal – yet 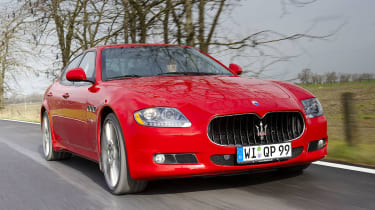 What have the Porsche Panamera, Aston Martin Rapide and (should it ever see the light of day) Lamborghini Estoque got in common? Despite what their makers might claim, it’s this: they’re nothing new. The sleek, ground-hugging, limo-sized four-door saloon with a supercar badge and authentic multi-cylinder soundtrack was honed to something approaching pitch perfection by Maserati with the Quattroporte years ago.

This isn’t to say the new raft of rivals won’t bring something new to the party, more that they’ll have to. The QP has settled so snugly into the uber-sporty limo groove, it virtually owns the copyright. But Maserati hasn’t grown complacent. Year-on-year, the formula is finessed with the aim to sharpen driver appeal at minimal cost to comfort, and 2009 is no different. Building on last year’s range facelift, the new Sport GTS is billed as the fastest, sharpest Quattroporte yet, powered by the 4.7-litre V8 from the GranTurismo S. As with that car, the always controversial Skyhook adaptive damping system has been replaced by conventional passive dampers and the suspension lowered – in this instance by 15mm at the front and 11mm at the rear.

Compared with the regular wet-sump 4.7 motor in the current Quattroporte S, peak power jumps, if that’s the word, by 8bhp to 433bhp and the rev limit has been raised by 100rpm to 7200rpm. But then levering in a heap more horsepower was never Maserati’s intention; the marginal gains are a result of a new exhaust system with a valve activated by a ‘Sport’ button on the facia that bypasses the normal noise-damping pipework and delivers the engine’s always musical exertions uncensored. The throaty bellow is allowed to hit a slightly higher note courtesy of new transmission software that’s only recently become available. And although 100rpm might sound inconsequential, Maserati’s ever-friendly, ever-ready ex-Formula 1 driver-come-PR-consultant, Ivan Capelli, proves that it isn’t by showing us overlayed traces of Sport GTS and QP S on a lap of Ferrari’s Fiorano test track which the new car completes 1 second quicker thanks, in part, to the transmission exploiting the higher rev ceiling by allowing a lower gear to be grabbed earlier while braking hard into the tighter bends. The headline figures are improved, too, the 0-62mph time falling from 5.4 to 5.1sec and the top speed increasing to 177mph from 174mph.

So, real, tangible performance gains to go with the new black grille, 20-inch ‘multi-trident’ rims, dual oval-shaped exhaust pipes, more shapely Alcantara and leather ‘M-design’ seats, Titanext interior trim strips (a sort of 3D carbonfibre) and longer steering wheel paddles. And tangible improvements in quality, too. Maserati’s long battle with its suppliers to achieve sustainable consistency finally seems to be paying off. And every Maser that leaves the production line now gets a 40km test drive.

It all seems to tally with Maserati’s position as a re-emerging force with a growing market share. But then the current-shape Quattroporte is only a generation removed from models with reputations flakier than a Danish pastry. More than most car-makers, Maserati knew that short-term improvements would be nullified by long-term memories and that, from the customer’s perspective, the deal rested on a knife edge: raw desire precisely balanced by nagging uncertainty. The tipping point for some, perhaps unsurprisingly, was the clutchless, paddle-shift DuoSelect transmission. Its aggressive, no-prisoners style of cog-swapping was a real love-it-or-loathe-it proposition: the concensus seemed to be about 50/50. But now that’s out of the equation, too.

Indeed, the latest versions of ZF’s six-speed auto (as used by Maserati and Jaguar) are the nemesis of every robotised manual gearbox in existence and are now so good, and so driver-focused, it’s hard to imagine anything better, other than changing gear yourself. That in the Sport GTS meshes so beautifully with the engine’s dynamic characteristics, the interaction quickly forms the backbone of the driving experience, especially in manual mode where it hands the driver, and not the rev-limiter, the decision to change up and, in an entirely appropriate reading of the word ‘manual’, won’t kick down on full throttle, either.

This enhances the sense of control and involvement on a suitably challenging road and, on those an hour or so from the Maserati factory in Modena, made me reflect, perhaps for the first time, that it felt natural and right to be driving a QP hard for pure enjoyment rather than a sense of duty. No, the Sport GTS doesn’t feel as fast as a BMW M5 or Audi RS6, at least not in a straight line. But, in real world conditions, it isn’t that far off, it sounds gloriously, magnificently faster with the Sport button engaged, and possesses a chassis touched by genuine star quality; one that shines all the more brightly with superbly well calibrated conventional dampers. True, the ride doesn’t do ‘cossetting’ anymore – the springs are stiffer by 10 per cent at the front and 30 per cent at the rear – but the damping is now so deftly judged, and body movements so closely controlled, it makes the Sport GTS feel about half a ton lighter than it is and, remarkably, even more agile than the physically smaller Jaguar XF-R, though the supercharged Jag has it licked for straightline pace, comfort and refinement.

The steering might benefit from a smidgen more feel but is well weighted and wonderfully accurate. Less so the brake pedal feel, which is wooden and seems to have about an inch and a half of dead travel. And, improved as the front seats are, they still lack lumbar and under-thigh support. But all that is easily forgiven. Right now, no other large saloon does style and sound as well as the QP Sport GTS and few get close to matching its handling. So here’s a message for those about to try: you’ve got your work cut out.