5.7-metre long electric concept will make its debut during the Monterey car week 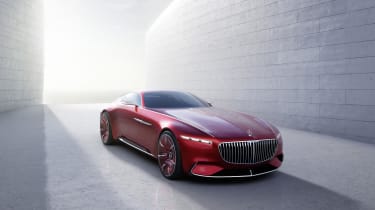 Daimler has unveiled the Vision Mercedes-Maybach 6 – a 5.7-metre, electric-powered behemoth it says represents the ultimate in luxury.

With nods to both the future and past, the latest Maybach concept has been designed to combine classic proportions with the latest technology in the form of ‘hot’ emotional design and ‘cool’ intelligent details.

The former is accomplished with an elongated body and a vast bonnet, and a rearward-positioned, ultra-sleek cabin. The idea behind this is both presence and aerodynamics – with few details to spoil airflow and long contours, air is said to hug the bodywork throughout the vehicle’s length and break away at the tail.

We’re less convinced by the overall aesthetic, which is almost cartoonish – and such a vehicle probably wouldn’t be owned by the “good guys” in a cartoon – and at 5700mm in length we’ve a sneaking suspicion its profile goes beyond “imposing” in the metal and breaches “obnoxious” territory.

With an enormous chrome grille and 24-inch cherry red wheels you might also call it “vulgar”, but things are somewhat better in the Maybach’s cabin which trades deep reds for relaxing whites and blues.

Mercedes calls it a ‘360-degree lounge’. While some details are again inspired by the classic – the seat pattern is inspired by a Chesterfield look – but the ultra-simple lines spanning the doors and dashboard, the ‘hyperanalogue’ instruments (with traditional needles in crystal displays) and continous glass display are all resolutely modern. 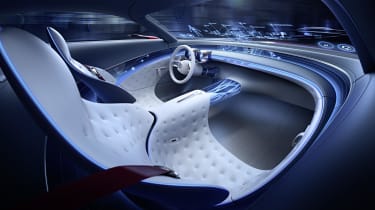 The curved display shows most information related to the car’s operation, as well as navigation data and menus – some of which extend into the doors.

The front windscreen serves as extra display space, with driving-related data and geographical information – all gesture-controlled – relayed across its full width.

At the Maybach’s heart though is its electric powertrain. Power is the operative word here, with a 738bhp output from four electric motors, each powering a separate wheel. For its size, battery capacity is relatively small at 80kWh (bear in mind a Tesla Model S now carries a 90kWh pack), but that’s enough for around 310 miles of driving by European measures. A more realistic estimate is the 200 miles claimed in American EPA-standard testing.

Thankfully, quick charging is on the cards, with a DC Combined Charging System plug allowing a 60-mile boost in only five minutes. Provisions for wireless charging are also included.

The Mercedes-Maybach 6 makes its public debut at Pebble Beach as part of the Monterey car week.