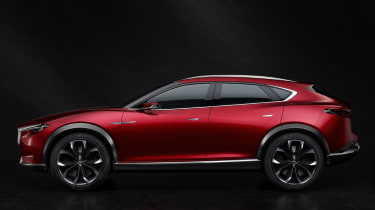 You always know where you stand with Mazda. Over the last few years, the Japanese firm has previewed its production models with a string of concepts with evocative Japanese names –Hazumi, Takeri, Minagi.

Without fail, each has previewed a subsequent production model almost to the sweep of a designer’s pen.

That means the firm’s latest concept, dubbed Koeru, is sure to reach the road almost unchanged from its current form. A new crossover SUV concept, the car continues Mazda’s ‘Kodo – soul of motion’ design language, used to great effect on the new MX-5, and all of Mazda’s volume production models.

It bears some similarity to the current CX-5 crossover, but touts a sleek roofline quite unlike that of the production car. It’s a hint that Mazda plans to echo some of the premium brands in offering a sportier, coupe-like crossover in addition to its more practical models.

Further details on Mazda's sporty crossover are expected to follow shortly. You can keep up with our Frankfurt motor show coverage by heading over to our Frankfurt show hub page.