Mazda hasn't gone down the road of offering eco-specials in its 3 such as the Golf BlueMotion, nor has it turned to turbocharging to extract the best from petrol engine technology. Instead, it's developed a technological strategy it calls 'SkyActiv', in everything from engines, through gearboxes, to the chassis itself.

SkyActiv technology uses techniques such as direct injection, high compression ratios for petrol models (and low compression ratios in diesels), variable valve timing and special exhaust manifolds to improve efficiency and power. Another example of SkyActiv technology is a clever stop-start system that uses combustion to restart the engine instead of the starting motor, thus saving energy.

Even so, the Mazda3's efficiency numbers are adequate rather than class-leading. The lowest emissions rating comes from the manual diesel version of the Fastback, at 104g/km, with the hatch not far behind at 107g/km. That at least means a low annual road tax bill for private buyers and relatively low Benefit-In-Kind for company car drivers. 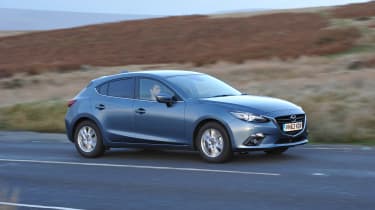 Fuel bills should be kept low too with a combined economy figure of as high as 72.4mpg (or 68.9mpg for the hatch). Fitting the automatic gearbox to the diesel engine (hatch only) considerably worsens things to 127g/km and 58.9mpg so business buyers are likely to stick with the manual.

Retail purchasers are expected to favour petrol power in the Mazda3 and for low mileage drivers the 1.5-litre model should be adequate thanks to a low purchase price and efficiency numbers of 119g/km and 55.4mpg. Saying that, the 118bhp 2.0-litre engine comes with identical emissions and economy ratings when fitted with a manual gearbox. The 163bhp petrol model's 135g/km rating isn't bad for the performance, but it'll not be popular in the UK.

Insurance groups are 13-24 for the 3 and Mazda offers fixed price servicing for three years or 37,500 miles, which can be paid for monthly over that time to spread the costs.