The all-new Mazda 6 saloon has been unveiled at the Moscow motor show, and will go on sale around the world later this year. 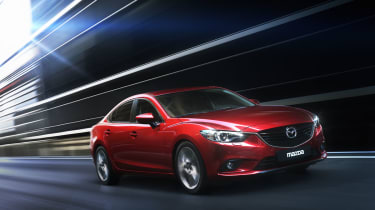 The all-new Mazda 6 saloon, featuring the company‘s SkyActiv lightweight technology and new sharper look, has been officially unveiled at the Moscow motor show.

Mazda has utilised its new SkyActiv lightweight platform, which uses incredibly stiff steel box sections to form the floorpan. When fully constructed, it equals a weight saving of about eight percent while giving the structure 30 percent more torsional stiffness than the outgoing model.

The new 6 takes its styling inspiration from the Takeri concept launched last year, which is based on Mazda’s new brand-wide ‘Kodo’ design language. Mazda is aiming to take the new car further up market, stealing sales from the BMW 3-series and Mercedes C-Class market.

The 6 is packed with safety equipment – including automatic city braking and rear blind spot monitoring – as well as regenerative braking system, stop-start and a clever new exhaust filtering system to lower emissions.

According to Mazda, the development engineers were given specific instructions to make the car more driver-orientated, providing a smooth, progressive and enjoyable drive – even citing the MX-5 as a benchmark for driver involvement. It features McPherson strut and multi-link rear suspension.

Mazda hasn’t released any more details about the European-spec cars yet, but this model will be unveiled along side the estate at the Paris motor show where full details and a more accurate launch date will be released. The biggest seller in the UK and mainland Europe is expected to be the 2.2-litre SkyActiv diesel engine found in the recent CX-5.