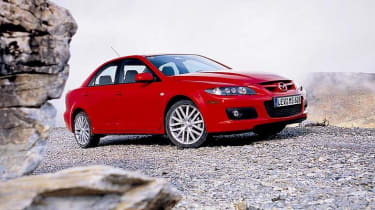 Remember the Mazda MPS Concept shown at the Paris motor show in 2002? It looked fantastic, and with an Impreza-rivalling 280bhp, four-wheel drive, and the promise of a slightly subtler but still unashamedly aggressive driving experience, Mazda's take on the sports saloon looked a mouth-watering proposition. Especially when you remembered that the cooking Mazda 6 almost out-Mondeos the real thing; engaging and fluid, if lacking the bite to really excite.

Fast forward to 2006. Rush into your local Mazda showroom, feast your eyes on the production Mazda 6 MPS and you'll be filled with, er, disappointment. It's not a bad-looking car, and the bulging bonnet-line and aggressive face are certainly reminiscent of the MPS (Mazda Performance Series) concept, but from the A-pillars back it looks like Mazda ran out of confidence. There's none of the broad-shouldered aggression that Imprezas and Evos have to spare, and although clearly trying to strike a much less ostentatious compromise, I can't help feeling that the MPS is playing it a little too safe.

An effective Q-car then? Well, delve beneath the surface and the MPS starts to tug at your curiosity all over again. Mazda has turbocharged and intercooled its smooth 2.3-litre four-cylinder engine and, in the search for efficiency, also equipped it with direct injection (a first for Mazda) to boost power to 256bhp at 5500rpm and torque to an impressive 280lb ft at 3000rpm.

Under normal circumstances all of that power is fed to the front wheels via a slick-shifting six-speed 'box, but an electronically controlled Active Torque Split differential can redirect as much as 50 per cent of the drive to the rear if necessary. The system has three programmes, Normal, Sport and Stability, which the electronic brain switches between, without the driver's knowledge, depending on road speed, steering angle, lateral g, yaw rate and engine speed. A limited-slip diff in the rear axle further aids traction and stability. Mazda claims the MPS is good for a 6.6sec sprint to 62mph and rock- solid at its maximum 150mph.

It's an impressive spec for the modest £23,950 asking price, and pitches the MPS against the new front-drive Vectra VXR. When you discover that Mazda has gone to great lengths to stiffen the bodyshell (it's over 50 per cent more rigid than a standard 6) in search of more consistent suspension response (which itself is 25 per cent firmer at the front, 26 per cent at the rear, and equipped with thicker anti-roll bars), you sense that the subtle MPS could actually be an unexpected rival for the sledgehammer rally replicas.

Inside, the quality is excellent, although there's not a huge amount of style to go with the obvious integrity. It's neat and attractive, but nothing like as special-feeling as something like an Audi A4. Even so, the seats are supportive and the driving position is spot on. Twist the key and the four-cylinder engine catches quickly and idles almost imperceptibly. The gearshift feels smooth, light and very quick, and the torquey engine immediately gives an impression of real muscularity.

The MPS rides well too, more 3-series than Impreza or Evo. In fact, only the slightly disconcerting steering feel chips away at a good first impression. The MPS retains the standard 6 rack but the assistance has been lessened to create a 'beefy' feel. Unfortunately the weighting feels inconsistent and the front wheels don't respond to the first few degrees of lock. Despite the talk of stability when pressing on, at UK-motorway speeds the MPS can feel a little vague and you find yourself instinctively nudging-in small steering inputs just to feel exactly what the car is doing.

At medium speeds the picture is clearer and on admittedly smooth but very demanding Spanish roads the MPS feels agile and keen to play. In very tight turns it scrubs into understeer, the four-wheel-drive system failing to get the power to the rear with enough conviction, but through more flowing turns it responds more cleanly and starts to make sense.

The steering is a shade slow and there is some turn-in understeer, but if you push through this you can feel the rear wheels start to come into play. The result is a nice neutral stance and the narrow 215-section tyres seem to help it quickly get up on tip-toes and start to flow. If the turbo is really working, the 6 can even be persuaded to power-oversteer in a Mitsubishi Evo style. Not what I was expecting at all.

The engine is very effective, punching hard from 2500rpm and feeling every bit of its 256bhp. Only as the revs rise over 5500rpm does the power start to drop off, and then you notice that despite Mazda's best efforts the in-line four doesn't have an inspiring voice. It's not offensive, just lacking in character.

Compared with the rabid Evo, you could say the same about the MPS as a whole. But Mazda feels there are plenty of people out there who could do without that divisive 'character' that loses as many buyers as it snares for Mitsubishi and Subaru. The MPS tilts more towards the BMW 330i, which causes problems of its own. However, with competitive pricing, strong performance and a chassis keen to indulge, the MPS is well worth a look.