Peter Tomalin takes on our Mazda MX-5, and intends to run it on a shoestring throughout summer. We'll see... 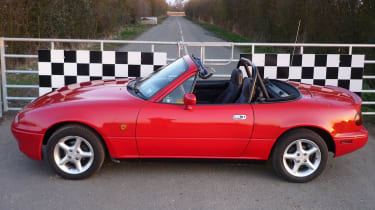 Weirdest thing happened when I went to drive the MX-5 the other day. As I backed it off the drive I could hear this sloshing noise from somewhere close by. As I dabbed the brake, I could distinctly hear the sound of what seemed to be quite a large quantity of water rushing around somewhere in the car, and when I accelerated forward it sloshed back again. I eventually worked out that it must be trapped in the sill, and further investigation revealed there are narrow drain holes at either end which apparently sometimes become blocked. I found an old knife, waggled it around a bit, and lo, about two pints of water came pouring out. Better out than in, as they say.

It’s great fun, just tinkering around with the little Mazda. I recently splurged on a new gearlever gaiter to replace the torn old item, some chrome vent rings to lift the rather drab dash, and a pot of touch-up paint to fill the various stone chips. Total cost, about 40 quid. I’m going to do as much of the servicing as possible myself (don’t snigger. It won’t necessarily end in disaster). So far I’ve slipped in a third of a litre of synthetic and it’s still running, so there. I reckon it should be perfectly possible to run this £700 Roadster on a shoestring for the summer. We shall see. I was pleasantly surprised to be able to get it insured for around £150 for both me and Mrs T. That’s one of the advantages of getting old. In fact, when I think about it, it’s probably the only advantage to getting old.