A new road means newfound fun (and some air-time) in our long-term Mazda MX-5 2.0i 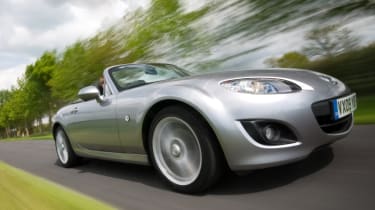 I received some awful news earlier this month: Mazda had been in touch to say they wanted to call our MX-5 back sooner than we’d expected. On hearing this, I vowed to get every last drop of enjoyment out of the car while I still had the chance. So, after scanning some maps and picking the brains of the the road test team, and with the help of some glorious weather, I decided to investigate some new roads that would really challenge the car – and me for that matter. After all, the MX-5 is the best learning tool I could hope for as a relatively inexperienced driver.

Leaving slightly earlier for work in the morning, I’ve been deviating from my usual, mundane route to the office and taking the fabulous B660 instead, where I can really enjoy the Mazda at its best. With the thought of my time with the car being cut short in the back of my mind, I’ve been making the most of every mile.

Unsurprisingly, with all the fun I’ve been having, the MX-5’s tyres are now ready to be changed. Mind you, they have covered over 15,000 miles, which is pretty respectable. Luckily, John Barker has MX-5 tyres to spare after this month’s tyre test (see page 108). Even better, we’ve managed to persuade Mazda to extend the loan, purely in the interests of research of course, to see what different tyres are like to live with. Well, that’s what we told them anyway!

It’s not all good news, though, as the MX-5 has developed a slight fault: the handbrake light has started flicking on and off under heavy acceleration. Anybody else had this problem? If so, email me at fastfleet@evo.co.uk.