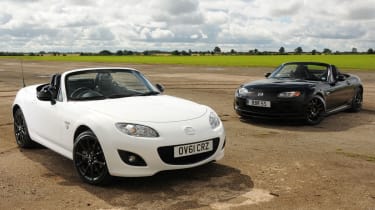 What is it? Mazda’s MX-5 might be the world’s best-selling sports car, but in standard tune it has always promised more than its modest power is able to deliver. Fortunately, its potential was identified quickly by tuners, and none sooner than BBR.  The Northamptonshire firm recently reprised its turbocharger conversion for the original mk1 with a special 20th Anniversary Edition, but BBR has also been working hard developing an array of upgrades for the latest mk3 and 3.5 models. We’ve sampled two here - the naturally aspirated Super 180 and the supercharged Stage Two version. The conversions can be applied to either the 1.8 or the 2-litre engine and yield impressive gains in power, torque and excitement.  BBR Super 180 The Super 180 upgrade consists of a stainless steel sports exhaust and 4-into-1 manifold, together with a high-flow air filter and BBR’s own engine remap. Power rises 22bhp on the 2.0, resulting in a total of 180bhp, with gains starting from just 1750rpm, while torque lifts by 20lb ft to 159lb ft, the peak arriving a useful 750rpm earlier. (Similar improvements are achieved with the 1.8.) The result is a sharp, clean, rev-happy delivery that really encourages – but doesn’t rely upon – working the engine right through the rev range. The gains are more subtle than the big bang from turbo- or supercharging, but there’s no question the Super 180 is quicker and far more responsive. In short it feels like a sports car.  Thanks to the optional Supersport exhaust silencer, it also sounds much more snorty. It’s fine for a weekend car, but if you use your car every day then you might prefer BBR’s less vocal standard silencer. At £2394 fully installed, the Super 180 upgrade makes a big difference to the urgency and character of the MX-5 while preserving the purity of the original car. BBR Stage Two If you want a much bigger performance hit, the Stage Two supercharger conversion has your name all over it. Our test car is a 1.8-litre model, impressively boosted from 124 to 231bhp and from 123 to 190lb ft. Along with BBR’s ECU remap, there’s also a new inlet manifold, an Eaton MP62 supercharger, an air-to-water intercooler, high-flow injectors and a stainless steel sports exhaust. When applied to the 2-litre MX-5, power and torque peaks rise to 258bhp and 208lb ft respectively. The Stage Two MX-5 is a seriously quick car, with satisfying shove from a little over 1000rpm to the red line. The delivery is more linear than the Super 180’s, and although you don’t quite get the same aggression, the in-gear potency – and therefore overtaking ability – elevates the blown MX-5 into another league. Such grown-up performance comes with an equally adult price - £7674 fitted. But with mk3 MX-5s becoming extremely affordable (you can pick up a decent example for under £7k) it’s entirely possible to create a formidable sports car for as little as £15,000.