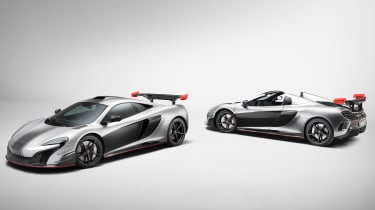 One lucky McLaren customer is due to take delivery of a twin pair of MSO commissioned cars. The two McLarens, one a spider the other a coupe, have been customised by the brand’s in-house Special Operations division according to a unique personalised specification.

The two cars are based on the previous generation Super Series products and are compilations of cherry-picked parts from the 650S, 675LT and the extensive MSO options list. However, McLaren has deemed the cars  to be so bespoke that it doesn’t mention the base models in the model names -  both cars having been named simply MSO R.

Bodystyles aside, the only detail separating the two cars is the finish; satin on the coupe and gloss on the spider. The carbonfibre central stripe adds a bit of drama to the otherwise subdued Liquid Silver colour scheme, while the roof scoop, dive plains and pronounced rear-wing are references to Le Mans GT class racers.

The front bumper and bonnet are MSO exclusive parts, as too are the roof scoop, rear deck and louvered wings. The explicit exclusivity of the duo is underlined – literally – by a red pinstripe beneath ‘MSO R’ lettering on the front bumper, skirts and rear wing end plates.

The carbonfirbre rear splitter looks to have been woven into the same shape as the equivalent piece on the 675LT. Finished in black, gloss and satin, to match the respective cars, the five-spoke wheels mimic the 675LT’s as well.

> Click here to read our review of the McLaren 720S

Lashings of red-stitched Alcantara trim the tactile surfaces and combine with carbonfirbe on the steering wheel. The red-bucket seats sport the inverse colour scheme, with a red base colour and black stitching.

Changes to the twin-turbocharged 3.8-litre V8 have also been made. Power is rated at 679bhp, 13 more than a 675LT, with 516lb ft on tap. Gains are courtesy of a hand-polished, titanium exhaust system, which features a ‘crossover muffler’, with longer pipes optimising gas flow. 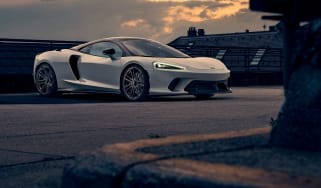