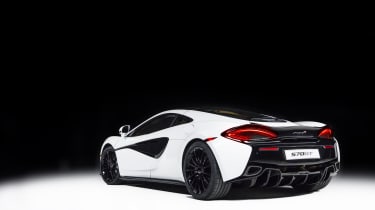 The in-house special division has made a number of modifications to the standard 570GT, which sits alongside the 570S and soon-to-be released 540C as part of McLaren’s Sport Series range.

The suspension and steering setup remain the same as the standard GT with spring rate stiffness dialled back 15% in the front, and 10% at the rear over the 570S. The steering has been recalibrated with a 2% slower rack compared to the 570S to deliver a more relaxed GT-type experience.

Much of MSO’s work on the 570GT is visual, such as the sills which are carbonfibre-clad and coated in a gloss lacquer. The car is finished in the MSO Piano Black package consisting of black exterior detailing and pearl white body colour. Inside, the seats and centre console are trimmed in saddle tan leather, with carbonfibre chosen for many of the interior components. 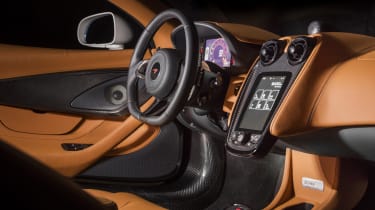 MSO has also developed an electrochromic glass roof. A touch sensitive headliner allows you to increase/decrease the degree of tint in the roof though five levels, allowing you to control the amount of light and protection for cabin occupants.

A new lightweight titanium exhaust, developed off the back of the 675LT project, represents the only mechanical change over the regular car. The 30% lighter exhaust should emit a ‘progressively richer and more characterful tone’ according to McLaren, and do so ‘more immediately as the revs rise than the standard exhaust.’

The exhaust is clad in a golden titanium nitride tint heat shield, a design cue likely inspired by the gold-plated engine bay of the McLaren F1. These are visible through the rear air ducts of this MSO 570GT.