McLaren 600LT – full specs, details and what it’s like from the passenger seat 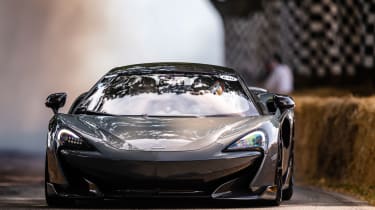 After revealing the performance figures of its new 600LT at this year’s Goodwood Festival of Speed, McLaren allowed evo to jump into the hardcore supercar as Kenny Bräck, the firm’s chief test driver, drove it up the hill.

From the passenger seat, those figures seem entirely plausible. The initial launch is, perhaps, not as brutal as if it had been four-wheel drive – a degree of wheel spin holding it back, slightly. But as the turbos take over the speed seems to build relentlessly until Bräck brakes for the first corner. 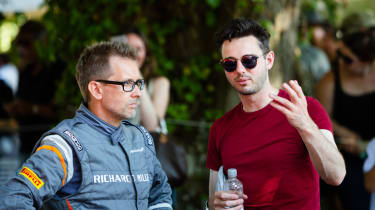 Power is still provided by the ubiquitous twin-turbocharged 3.8-litre V8 engine, but with an improved cooling system and reduced back pressure from a new exhaust system. The upgrades result in a power upgrade to 592bhp – a 30bhp lift over the current 570S – while torque is 457lb ft.

The exhaust system is what’s particularly interesting as the outlets have moved from their usual place within the rear bumper to atop the rear deck, not dissimilar to the Porsche 918 Spyder. Not only does this make the engine sound a bit louder, with a more distinctive mid-range howl, Bräck says that it’s also spectacular at night as flames are visible in the rear-view mirror.

Trying to feel how different the LT might be compared to its toned-down brother, the 570S, from the passenger seat is tricky. Especially when there’s someone with an incredible amount of talent, an Indy 500 winner like Bräck for instance, at the wheel. However, there’s clearly a little less body movement under braking and a touch less body roll as Bräck guides it through the corners.

It could be down to the driver’s skills rather than a fundamental change to the car, but the ease with which Bräck is able to control the car as it edges towards its limit of grip – letting the rear wheels spin and the back to arc wide on the exit of even the tightest bends without losing speed to scrabbly slides – suggests that the more aggressive chassis set-up will make the 600LT a more progressive and playful car than the other junior McLarens.

As well as a more hardcore suspension, the interior has been given a race-inspired makeover. There’s lots of carbonfibre, as you’d expect of a car with a chassis made from the stuff, lots of Alcantara and not a lot of carpet.

The biggest change from the 570S, however, is the seats. Made from carbon and trimmed in Alcantara – naturally – the bucket seats, with only the tiniest amount of padding, look straight out of a GT3 car. The wide shoulder supports and deep sides make them tricky to get in and out, but the reality is they’re hardly any more difficult than the sports seats in a 570S. And, even with minimal cushioning, they’re very comfortable, with enough space behind your head to wear a helmet without it clashing with the back of the seat. 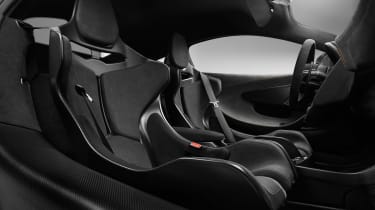 Priced from £185,500, the new 600LT is fitted with a suite of new performance and aesthetic upgrades over the 570S which it is based on, in a similar mould to the brilliant 675LT that brought the nomenclature back to McLaren’s model range after nearly 20 years since it was first used on the F1 GTR of 1997.

New carbon bodywork adorns the exterior, lengthening the overall car by 74mm, as the ‘Longtail’ nomenclature would suggest. The aggressive front splitter, sills, diffuser and rear wing are all now made from carbon, and simultaneously reduce weight and increase downforce. The new stacked rear wing is fixed, with a heat-proof coating in its centre due to the heat from the new high-mounted exhaust outlets positioned just in front of it.

The bodywork will be manufactured by McLaren Special Operations, and together with other weight-saving elements in the interior, reduces the 600LT’s weight to 1247kg, some 96kg down on the 570S. The reduced mass gives the 600LT a power-to-weight ratio of 474bhp/tonne; for context, 25bhp/tonne more than the Ferrari 488 GTB.

The 600LT will be built for a maximum of 12 months alongside regular models produced at the McLaren Production Centre in Woking. As all of the panels are constructed by MSO and hand assembled, numbers will remain low, however, although McLaren isn’t releasing any specific numbers.

At £185k, the 600LT sits alongside more powerful rivals like the Ferrari 488 GTB and Lamborghini Huracan. Nevertheless, the McLaren will be a rarer, and more hardcore proposition, and is more likely to be pitted against cars like the 911 GT3 RS. We are already very fond of the standard 570S, so the 600LT promises to be something special indeed.