One of evo's favourite supercars is now available with limitless headroom 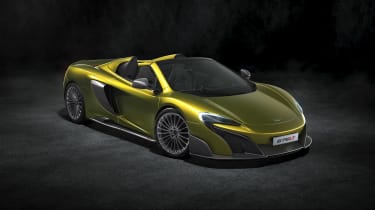 McLaren has released images and details of the latest addition to its Super Series range – the 675LT Spider.

That represents a £25,950 increase on the closed-roof model, but McLaren is unlikely to find it difficult locating customers – the company says the Spider’s introduction is a direct result of ‘significant customer demand’ for such a model.

Those customers will get one of the fastest drop-tops on the market. Firepower is identical to that of the coupe, its 3.8-litre twin-turbocharged V8 delivering a devilish 666bhp at 7100rpm and 516lb ft of torque from 5000-6500rpm.

Performance figures are very similar to those of the coupe, partly because McLaren has been able to keep the LT’s weight down. There’s just a 40kg penalty, and it’s still a whole 100kg lighter than the 650S Spider, with a 1270kg dry weight. No extra chassis stiffening was required, either, as McLaren deems its carbonfibre MonoCell chassis strong enough already.

Keep speeds below 19mph and the three-piece retractable folding hardtop can be retracted, allowing greater access to both the great outdoors and the V8’s blaring exhaust note.

Styling differs little to the coupe, save for the gap where a roof would normally sit, though new 20-spoke forged alloy wheels (19in at the front, 20in at the rear) and ‘Solis’ golden-coloured paintwork distance the car from its fixed-roof sibling. The Longtail airbrake – fashioned from carbonfibre – remains, as does the lightweight, polycarbonate engine cover of the coupe.

Its suspension setup is the same too – it boasts a track width 20mm greater than the 650S, with front and rear springs 27 per cent and 63 per cent stiffer respectively. Downforce is 40 per cent up on the 650S Spider.

A huge range of options, paint shades and personalisation parts are available, from air conditioning – it’s a no-cost option adding 16kg to the car’s weight – through contrasting interior stitching, and extra carbonfibre detailing in the Club Sport Professional Pack.

The coupe’s Club Sport pack (titanium roll hoop, four-point harness and fire extinguisher) is not available, but that’s unlikely to be a concern for the sun-seekers snapping up all 500 examples. Deliveries begin in summer 2016.